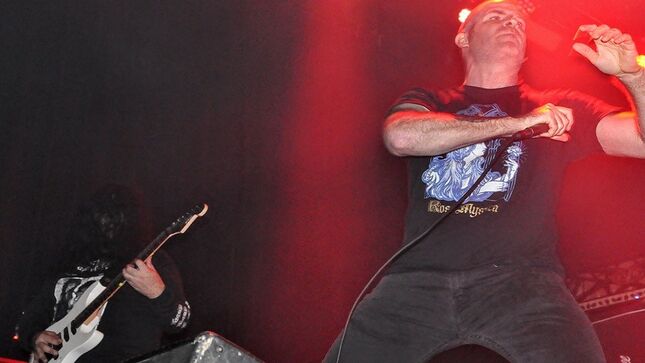 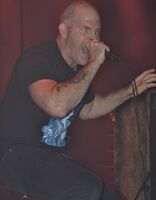 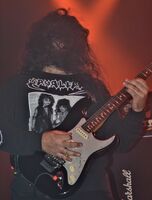 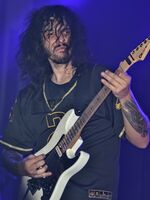 What was billed as the local band's record release party, for the Philly based label, saw several of the more intriguing, next-gen acts share the Union Transfer stage. Apart from being PHL based, Sumerlands inclusion on the Relapse Records roster, historically the province of some of metal's most uncompromising, brutal and disgusting noises, is a bit of a shocker. Beyond mere diversification, the label was searching for the next Unto Others (Idle Hands, prior to legally mandated change of moniker), a "moody," underground darling with mainstream crossover potential. And while Sumerlands possess some of those melodic qualities, they also share musical DNA, literally, with Eternal Champion (as three of the guys pull double duty). Lots of reviews use adjectives like melancholic or doomy. Even the Sumerlands social pages refers to them as dark...don't believe it: it's not an all-encompassing description. Most of the new Dreamkiller CD has an upbeat, energetic lilt, an almost gallop, exuding a good time feeling, complete with blistering guitar solos and smooth (dare I say "radio-friendly"?), sometimes high pitched vocals (courtesy of new singer Brendan Radigan). "Force Of A Storm" features a poppy synth throughout and sounds like an outtake from the Jake E. Lee era-Ozzy platter The Ultimate Sin.

Good to see folks from up and down the East Coast checking out up and coming acts. Commencing with "The Guardian", Radigan is an expressive frontman and it's a bit of surprise that the trilling (near falsetto) vocal accents come from that body. Almost from word "Go!" the small contingent on the floor breaks into a spirited jostling/joust. The infectious chorus to the title track off the new album is greeted like an old friend, surrounded by a swirl of guitars. Speaking of Dreamkiller, "Heavens Above", the cut which starts the record, comes next: a brief downshift in intensity. Middle of the show returns to a run from the '16 eponymous debut, including "Blind". Crimson haze greets "The Seventh Seal", the mosh pit temporarily put on hold. A double dose of new material closes the show. A blue lit "Edge Of The Knife" sees Radigan's voice creep into the higher register. Mid-tempo, boarding on pop, it would have been a huge MTV hit, in the late ‘80s. The aforementioned "Force Of A Storm" is a fitting title and even better send-off. When finished, fans fully expected an encore, but the guitarist, instrument in hand, as he prepared to leave the stage, grabbed the mic and apologized, announcing they'd depleted the repertoire of songs that they "knew"/had prepped. Damn! Well, there's plenty of good stuff left on Dreamkiller that wasn't aired. So next time...

Opening the night was Tower, making their third trip to the city in four months. Unfortunately, "the Philly curse" struck once again. In July, singer Sarabeth Linden was under the weather, so the guys played an instrumental set. On the heels of dismissing their drummer (one-off, fill-in, Keith Mikus onboard tonight) Tower could only play five songs, including a closing rendition of Sabbath's "Heaven And Hell". Regardless, they rocked their house and gave newbies just a taste of high energy fun they enjoy cooking up. Linden was all over the stage, genuflecting and bending over, backwards, getting close to the fan pressed against the barricade and letting loose her powerful wail. After opening with their signature tune, "Prince Of Darkness" begins as a slow boiler, then switches to rocket fueled guitar jam, led by James Danzo. Shame the lighting tech took the show off, turning on the red lights and seeming walking away from the board for the rest of the abbreviated set. The final original was "Blood Moon", which kicks off the Shock To The System album. Bit of an odd choice, given the prominent use of speedy drums fills (and they were playing with a "rental") but there's no doubting it's a kick ass slice of rock n roll accompanying Linden's repeated hoarse screams. Great stuff! Hope to see them, at full strength, before we reconvene at Hell's Heroes, in Houston, next March.

Wise getting Eternal Champion on the bill, as (previously mentioned) 3/5 of the line-up "moonlights" in Sumerlands and there's undoubtedly a large overlap in their audiences. Bulky frontman Jason Tarpey took the stage in chainmail headgear for the initial salvo of "Skullseeker". Maybe it's the earlier slot, or perhaps the music itself, but guitarist (and noted producer) Arthur Rizk is more animated during the Eternal Champion set than he'd be for the headliners. "The Armor Of Ire" is next and alongside “Ravening Iron" is a standout moment. Showcasing underground cred, a rendition of Mystic Force's "Awakened By The Dawn" might as well be a Champion original. For "Coward's Keep" Tarpey unveils his Axl Rose inspired "swimming" arm motions. Blue and green streaks of light shine down. Their time onstage came to an end with the punishing stomp of "I Am The Hammer", to the delight of a partisan crowd.

A trinity of worthy contenders for your consideration. Investigate!