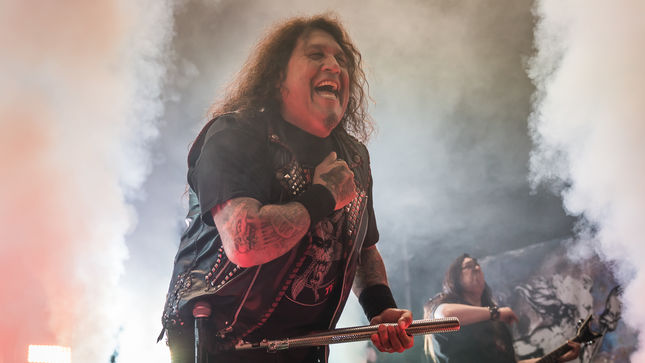 For the first time in human history, thrash metal fans could see the founders of the genre — Death Angel, Exodus and Testament — playing on the same stage on the same evening! Three bands from San Francisco Bay Area teamed up for a tour thoughtfully dubbed The Bay Strikes Back and visited 11 European countries in February/March 2020 with over 30 shows.

This tour was full of adventures with the musicians crossing the Baltic Sea by ferry during the storm Ciara, and escaped being quarantined in Milan because of coronavirus outbreak, though one of the shows had to be cancelled.

The London concert shook the walls of O2 Forum hall in Kentish Town on March 6. Over two thousand metalheads gathered without showing any fears over the epidemic.

Death Angel had set the scene with their all-time killer songs like “Humanicide”, “The Moth” and “The Ultra-Violence”, among the others. From the first minutes of the concert a massive mosh pit formed in the middle of the crowd with dozens of people slamming in it and the first crowd surfers started to appear above the heads.

The madness continued with Exodus playing socks-blowing setlist that started with the songs from their latest 2014 album Blood In Blood Out, followed by “The Toxic Waltz”, “Blacklist” and “Bonded By Blood”.  The flow of crowd surfers intensified.

After a short break to refill beer cups, Testament got out to the stage, decorated with artworks from their upcoming album Titans Of Creation. The thrash legends played 16 songs, including well known “Over The Wall” and “Practice What You Preach”, as well as newer songs like the fantastic latest single “Night Of The Witch”. The stream of crowd surfers became a real Niagara waterfall of bodies — security guys were sweating head-to-toe grabbing them out of the pit.

This was an unforgettable evening and a fantastic experience for all true metal fans. Looking forward to the new Testament album, coming out on April 3, and let’s hope another tour will follow!