TESTAMENT, EXODUS, DEATH ANGEL Thrash Philly On BAY STRIKES BACK TOUR - Need Me A Triple Shot Of That Stuff! 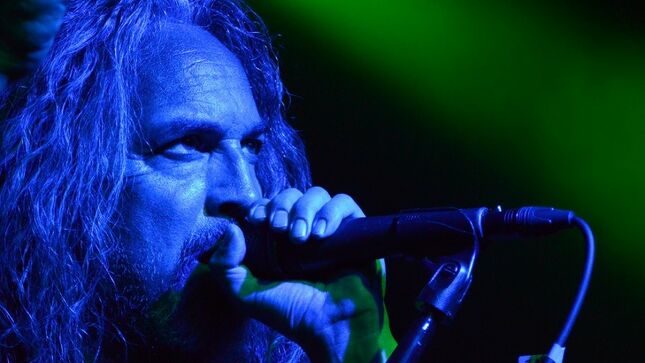 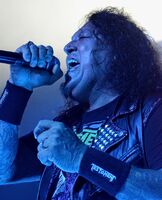 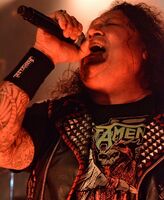 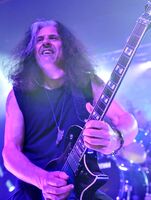 Like the alcohols referenced in the title (nicked from a George Thorogood lyric), some things just get better with age. A lifetime ago, none of us (band, nor fans) could have imagined in 2022, these neighborhood kids would a) still be together/playing, b) viable c) issuing relevant new music... yet here we all are! Exodus recently released a new album (Persona Non Grata), and while Testament's next effort probably won't see the light of day until next year, they're touring with Dave Lombardo (ex-Slayer) on drums. Death Angel is also working on new material, but they're just happy to have Will Carroll back, hospitalized with a serious bout of Covid (on this tour's original string of European dates). Actually several members of each band, and their crews, were infected in those early days of the pandemic, April 2020. Because of all the uncertainties in the last two years, the guys decided to continue touring together, so much so, that another round (this fall) is already announced. So this is definitely NOT a nostalgic flashback.

First up, Death Angel, fronted by the fiery Mark Osegueda. There may be some gray streaks in this lion's mane, but the roar's still there. The perfect cheerleaders, to get the crowd riled up, he repeatedly stirred the pot, goading the audience with "challenges" like, "You know you're at a thrash show" (basically calling for the fans to mosh/crowd surf). Before they departed, he added, "This is an 'In Your Face’ city. Security has it easy. They're going to go home and tell their significant others, ' I watched those fools.' They are here to catch you, keep you safe. We need to exorcise the bullshit of the last two years by (being) physical. Give them something to complain to their significant others about, when they get home!" His call to arms (and legs, both tumbling head over heels, across the barricade) was heeded by some, but the median age of the crowd had to be 50-something: thrashing days left behind for some aging bodies. 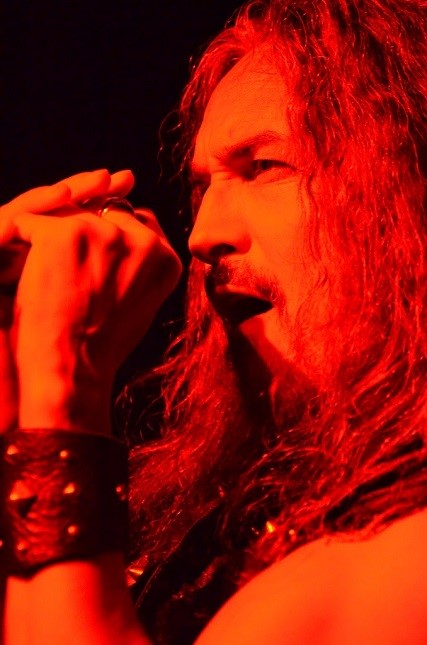 Show was supposed to start at 6:30, but it was closer to 7 PM, when they took the stage. Good thing too, as the crowd basically doubled in size, from when they began. They played a virtually chronological set, beginning with the intro, a snippet of "The Ultra-Violence”, then progressing through the catalog before ending with the more recent stuff.. As has been the case, on recent tours, guitarist Rob Cavestany, stage right. "Voracious Souls" and (bit of a surprise) staccato "Seemingly Endless Time" were welcomed like the old friends they are. The latter, highlighted in purple, is fueled with more adrenaline than its studio rendition. Throughout the set, the singer moved about the stage, frequently playing off Cavestany. Not only is his energy level remarkable, but his vocal sustain, still top rate. The locomotive chug of "The Dream Calls For Blood" got bodies moving, onstage and off. At one point, the stage is briefly cleared and Carroll gets (not really a solo) but a chance to be spotlighted, playing along to pre-recorded music. Ultimately, they end with ripping "Thrown To The Wolves", bathed in blue and green. Still underrated, but never underestimated. Love 'em.

Dr. Fauci wouldn't be happy with how close the flesh was pressed, pre-pandemic, sardine fashion, especially the closer one got to the stage. Exodus didn't help, laying down a vicious set of music that caused the crowd to further intermix. Also had the distinct feeling that the TLA bar staff hadn't seen such persistent, high volume demand (or at least in a LONG time), as from this old school crowd. With the demise of Slayer, Gary Holt is back in Exodus, full-time (not that he officially "left," his influence always present). Still, was odd to see "Exodus" without him. Jokingly referencing his past, the guitarist had a "Holt Awaits" back patch on his denim jacket. Speaking of yesteryear, early on battle vested frontman Steve Souza asked, "Remember when we used to fuck shit up at the (now sadly defunct music venue) Troc?" 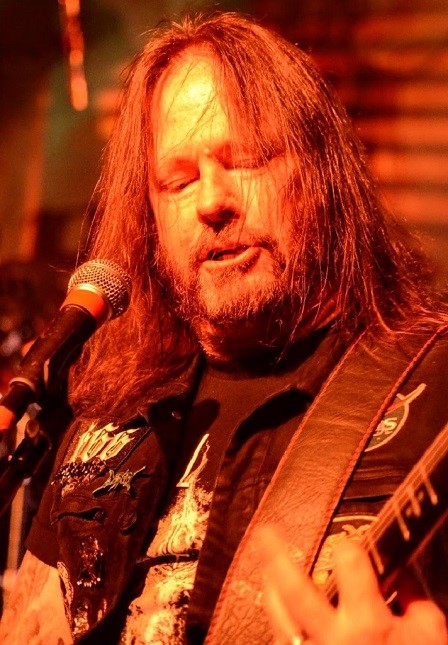 Almost as much movement by the guys onstage as their contemporaries in the crowd. Holt and guitar partner Lee Altus (Heathen) constantly switching sides of the stage, although Altus was more apt to camp out, in the center. After opening with "The Beatings Will Continue (Until Morale Improves)", one of three new compositions aired, it was back to the '84 debut, for "A Lesson In Violence". Sampling all eras of the band, "Blood In, Blood Out" delivered a pummeling, prior to Zetro exhorting, "I want to see you guys coming over (the barricade) all night." A purple hued "The Years of Death and Dying” was a bit of a respite, for band and hardworking security force, before blue bathed "Deathamphetamine". Odd, to hear a Rob Dukes (former singer) tenure tune (even if inspired by original singer Paul Baloff's overdose), but the rabid throng chewed it up and spit back the titular phrase, at Souza's behest. Throughout the night, Holt's head was seemingly on a toggle, a bobblehead figurine without limit. "Blacklist" see a solo Zetro venture stage right, fist aloft: an action mimicked by hundreds of supporters.

After his life/death battle with stomach cancer, drummer Tom Hunting is given the opportunity to speak to the fans, still perched atop his drum fortress. They also bring out Holt's guitar tech, who did the same job for Jeff Hanneman (Slayer). Cue "Only Death Decides" a deep cut from the oft forgotten Impact Is Imminent. Can see why it's added though, offers the chance for some great guitar playing, not merely riffs, with a lengthy instrumental section, devoid of lyrics. When finished, the stage goes black and is still not illuminated, at the start of "Prescribing Horror", which ultimately is steel blue. The closing run: "Bonded By Blood" (green, alternating with purple), "The Toxic Waltz" (snippet of Pantera's "Respect" evident within) and concluding "Strike Of The Beast" is unparalleled (well, at least until Testament's closing stretch). By the end, Holt, stringy, sweat soaked hair plastered to his head/face, plays his guitar vertically, as Souza hangs out stage left, headbanging.

While the tour poster reads like a Biblical rundown: (Testament, Exodus, Death Angel), there's no doubt who the headliner is. While Gene Hoglan returned to his reactivated Dark Angel, Testament asked ex-Slayer skinsman Dave Lombardo to rejoin (was part of The Gathering-era line-up). Like Exodus, Chuck Billy and Co. chose to begin with a "new" song, in this case, "Children Of The Next Level", which also kicks off Titans Of Creation, the first of a trio from said album. There's theatrical smoke and shadowboxes/risers on opposite sides of the stage, for the two guitarists: Eric Peterson, on the left, Alex Skolnick, the right. When Peterson steps up on the drum riser, down below, Skolnick, on the shadowbox, struts his stuff. "Practice What You Preach" is illuminated with a kaleidoscope of colors: green, red, white & blue, plus intermittent streaks of strobes. "The New Order" is red, with a return of the smoke plumes. When not actively singing Billy (no longer using the short, Freddie Mercury half-mic stand) plays a lot of air guitar and/or air drums (even toting a spare stick, in his non-mic hand), especially on flashing strobe punctuated "D.N.R. (Do Not Resuscitate)", the first song Peterson & Lombardo wrote together. It's the middle of a Gathering sandwich, that also included lesser remembered entries, "Eyes Of Wrath" and "Legions Of The Dead". 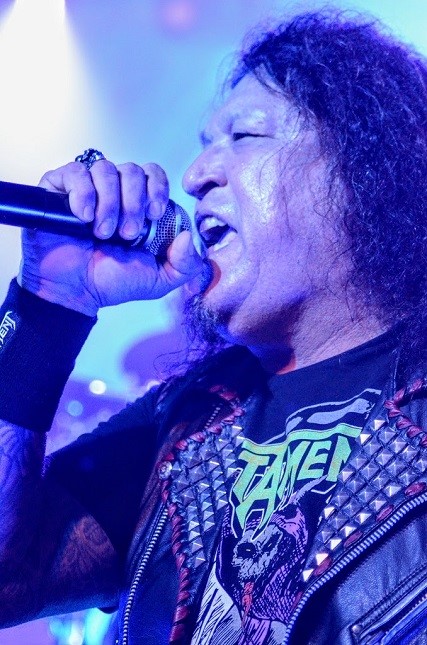 Following that Lombardo honor, it's almost endless hits for the last half hour. That tell-tale, high-pitched guitar flourish heralds the start to "Electric Crown", as swirling yellow pulses of light pierce an otherwise red draped stage. In a set of absolute rippers, forgot how infectious this melody is, as most sing along. Initially, bassist extraordinaire Steve DiGiorgio is on the upper tier, next to Lombardo. The tall four-stringer actually gets a brief solo spot, foot up on the stage front shadowbox, prior to "Souls Of Black". While heavy, both retain a groove inherent only on those early 90s albums, when metal was "lost", floundering between the more melodic and harsher, nu sounds. Billy references the old days, heading back to the debut for "Over The Wall", an ode to stagediving. Man, does he conjure a ferocious bellow on that one! Meanwhile, Skolnick handles the once "insane" riffs adroitly (his talent almost rendering them mundane), throwing in sweeps and embellishment to the already frenetic pace. Chaotic light show, never staying one color for too long (predominantly alternating between red and blue), but then those gyroscopic, 360 degree pods emitting focused, high intensity bursts of yellow and/or white. Like-minded "Into The Pit" follows, a last chance for breaching the barricade for the knee replacement & metal hip brigade. Gives a new meaning to "metal to the core" or "metal through and through," doesn't it!