The Norse Ritual Of WARDRUNA Takes Over Montreal 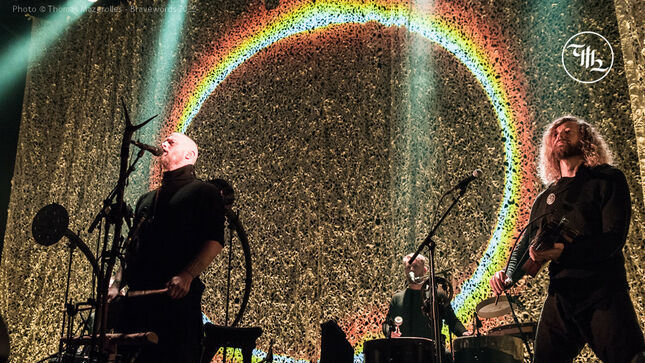 Nordic neofolk masters Wardruna were finally back in town to celebrate their 2021 album, Kvitravn, in front of a packed Metropolis, and Montreal fans were not disappointed, as the Norwegians delivered 1h40 of nothing but a mesmerizing concert.

Navigating through their excellent discography, Wardruna kept their mystic and tribal flame burning during the whole performance, really bringing up a trance and something hypnotic with repetitive melodic patterns, mixing strings and percussion in layers of original and ancient instruments, including these quite intriguing and huge horns, the bronze lures, and their haunting voices.

“It’s not about trying to be Vikings again, or trying to bring back tradition. It’s not about “my culture is better than yours”. It’s about bounding and living today through these things that were already there with us: it’s the same earth we walk, the same sky, the same trees.” Words of wisdom pronounced on stage by Wardruna’s leader and main composer, Einar Selvik.

A subtle way to make his point, about not just pretending to play on the easy and trendy Viking theme, especially through the TV show he participated that made Wardruna even bigger, widening their audience further than metalheads and tribal dark folk music enthusiasts. The composer would also mention is connection and appreciation of Montreal’s Ubisoft, while he worked on Assassin’s Creed Valhalla soundtrack.

With seven musicians on stage, Wardruna takes the challenge of bringing an ancient traditional style and practice of music, inspired by the primal and tribal eras of Celtic and Vikings ancestors, to the modern world of big venues, large stages with an electric sound system: and they're doing a great job at it.

The band manages to find the right balance between using today's audio technology to provide a powerful sound, with the drums and percussion stomping in good and  powerful low frequencies, a good amount of effects on the voices to make them larger like a mystical choir echoing in a divine reverb a few sequences, and the live sound of all traditional and “unplugged” instruments played on stage, without using amplifiers.

The whole performance was also brought to another visual level by a quite remarkable light show, once again finding that right balance between tradition and modernity: simple but really efficient with great details. Huge backdrops creating a texture where colors would play around to give a gold or blood aura, while projectors fronting each musician would create mysterious and weirdly shaped shadows.

That’s how Wardruna transcends and brings the magic of roots, ancient traditions to a modern reality, without losing credibility, while bringing another dimension and inviting the audience to dive and trance into their mystic world.

Especially during Einar’s fascinating solo interventions with that ancient harp, just one man and his instrument, a rare incarnation of the traditional bard.

Not to forget the great musical support of all band members, the unique color of Lindy Fay Hella adding the feminine touch in the middle of the low and bass-y back vocals of other musicians, making a powerful ensemble to makes Wardruna’s music transcend to a another level in concert.

“One of the things I miss the most today is singing in society. Singing as a way to bound together, as a medicine, a divine practice. So after this, go home and fucking sing”, states Einar before singing an encore after the Montreal’s crowd loud stomping on the wooden floor like warriors charging on a battle field.