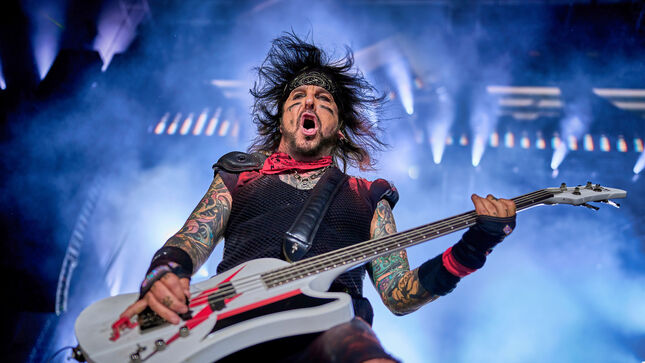 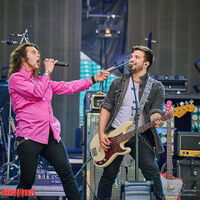 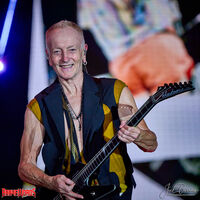 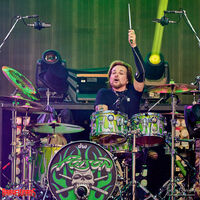 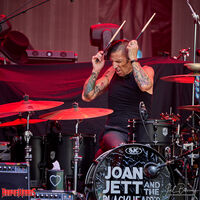 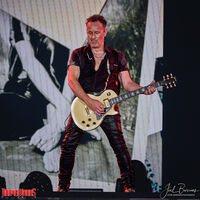 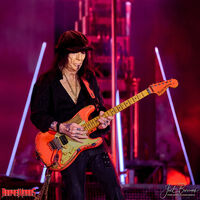 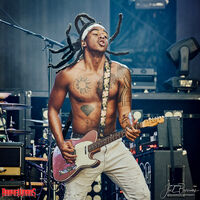 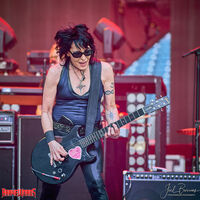 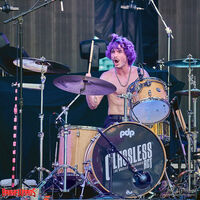 The seemingly endless refrain by today’s media that rock is dead has become headache inducing, if for no other reason than that it’s an outright lie. There may be something to the argument that this time honored art form’s popularity has seen more ebb than flow of late in terms of new blood, but those who have taken note of the burgeoning live scene that has commenced once more since the waning of the Covid lockdowns will recognize that a period of hibernation where others see a burial plot. Though the case of the massive live event that is Stadium Tour 2022 presents the lion’s share of its attractions as stalwart veterans entering their golden years, what took place at the Hard Rock Stadium in Miami, Florida on the 18th of June was the logical outcome of aging like fine wine, and the tower of hard rock fanfare that was built for the masses is all but assured to inspire many of the younger crowd to pick up the torch in one hand and an instrument/microphone in the other.

New blood paying tribute to the old while also forging their own path would be the first sonic shot across the bow at a little before 4 PM when L.A. hard rockers and newcomers Classless Act took the stage. Though in relation to the rest of the lineup for the evening they were 30-40 years their junior, this quintet brought the auditory fire with a degree of poise and precision that fit in well with the veteran crowd, while also displaying a wild level of youthful exuberance. Led by highly charismatic and off the wall front man Derek Day, who could be best described as a composite of Robert Plant’s high-end brilliance, Roger Daltrey’s power, Axel Rose’s grittiness and David Lee Roth’s stage presence, their comparatively short set the air ablaze, with riff happy bangers like the AC/DC meets W.A.S.P. homage with a Black Crowes swagger “Time To Bleed” and their own eponymous anthem and swift-paced closer “Classless Act” being the standouts and sealing their place among hard rock’s new elite.

Next to hit the stage would be one of rock’s original badass outfits and the most straightforward representative of the genre of the bunch Joan Jett and The Black Hearts. Though their image of rustic old school rock is more readily associated with leather jacket-clad bikers and smoke-filled bars than the glitz, glam and packed arenas normally accompanying the majority of the bands on the roster, they were never out of their element, bringing the thunder something fierce with such noteworthy classic covers as Gary Glitter’s “Do You Wanna Touch Me” (separating the man from the work naturally goes without saying), Springsteen’s “Light Of Day” from the 80s film featuring Joan Jett and Michael J. Fox that more people still need to see, and particularly The Arrows’ “I Love Rock ‘n’ Roll”. But the really salient points were when the 63 year old front woman showcased her enduring vocal prowess with a smoother performance on “Crimson And Clover”, as well as shouting to the four winds in solid order on her original bangers “Bad Reputation” and the riveting late ‘80s hit and closer “I Hate Myself For Loving You”.

The concept of showmanship would be taken to a whole other level with the entry of western Pennsylvania icons of the ‘80s Poison. Though they’ve long since traded in their outlandishly flamboyant getups for a more mundane ensemble of jeans and t-shirts, it seemed as though no time had passed since their original ascent to fame and notoriety, with front man Brett Michaels rushing about the stage and working the crowd in a manner more befitting a man in his mid-20s rather than one knocking on the door of 60. Their set consisted entirely of classic anthems from their first three albums, with the heavy-hitting “Look What The Cat Dragged In”, melodic romps “Talk Dirty To Me” and “Unskinny Bop”, and ubiquitous power ballad “Every Rose Has It’s Thorn” eliciting the most raucous crowd response, but honestly there was no low point to speak of during their one hour set. Special note should also be given to lead guitarist C.C. Deville for his unrelenting lead guitar assault from one song to the next, the apex being reached with a wild variation on Van Halen’s “Eruption” mid-way through the set in tribute to the recently departed original master of shred, and one would also be remiss not to be impressed at the equally off the hook drum solo delivered by recent cancer survivor Rikki Rockett.

A one-two punch of pure ‘80s rock nostalgia would then be chased by a mixture of the same with some newer material with NWOBHM-turned arena rock darlings Def Leppard entering the fray. Having taken the occasion during the Covid lockdowns to field a new studio album in Diamond Star Halos, several newer entries complemented the legion of ‘80s and early ‘90s hits that rounded out their 90 minute set, with the opening crusher “Take What You Want” checking all of the boxes of their signature sound right down the line and setting the stage for the assembly of fan favorites off top selling albums Pyromania and Hysteria. The signature choir of voices and instruments that make up their colossal sound were in top form, with helmsman Joe Elliott sounding particularly pumped up and powerful as he effortlessly led the charge on classic bangers like “Armageddon It, “Animal” and “Pour Some Sugar On Me”. Some surprising entries were also along for the ride from the old days such as the dynamic power ballad “Foolin’” and Hysteria deep track “Excitable”, though the biggest deep dive of the bunch would be the instrumental cruiser off High ‘N’ Dry “Switch 625”, which was chased by a highly impressive drum solo by one-armed kit man Rick Allen.

The audience elation would reach a fever pitch with the entry of the event’s final act, Sunset Strip mainstays and original purveyors of the ‘80s glam craze turned late ‘80s leather-clad heavy hitters Mötley Crüe. Though every veteran act to precede them had been an exemplary case of defying their age and adversity, this old guard quartet arguably had the most to prove between a couple of lackluster nights dogging Vince Neil earlier in the touring season, Mick Mars’ ongoing health issues and drummer Tommy Lee recently suffering 4 broken ribs two weeks prior. Suffice it to say, the tempered expectations that followed them onto the stage were met and surpassed, with Lee playing his proverbial ass off for the first three songs, including the blistering early ‘80s classic “Too Fast For Love”, before being relieved by touring drummer Tommy Clufetos. Likewise, Mick Mars would nail each riff and solo flawlessly like a stoic hero despite his chronic pain issues rendering him a virtual statue on stage, with his lead breaks on “Dr. Feelgood” and “Kickstart My Heart” being particularly exemplary. And even though his voice was still showing some occasional signs of wear and tear as he tried to replicate the glass-shattering high notes of “Shout at The Devil” and speed metal crusher “Live Wire”, Neil nailed the vast majority of the set and worked the crowd masterfully alongside a trio of bombshell backup dancers in The Nasty Habit.

If there was one single statement that could stand in place of all that was taken away from this five-fold crackerjack performance, it is that rock ‘n’ roll is not the realm of the cynic nor is it the abode of the naysayer. Despite four-fifths of his electrifying ensemble of acts having more years on the road behind them than in front of them, they stood as a mighty beacon from which younger aspirants of this still thriving art could draw inspiration. Not the ravages of time, nor a relentless campaign launched by the media during the reign of grunge/alternative rock has taken these unapologetic purveyors of partying hearty and playing fast and flashy down even a solitary tinge. If I were a betting man, I’d wager more inquiries about when Poison’s and Mötley Crüe’s next studio albums will happen should be expected from those who subsequently filtered out of Hard Rock Stadium on the night of June 18 than minds dwelling upon Gene Simmons’ notion that the style only has a home in the live setting for a finite number of years to come before it passes into memory.