THE WILDHEARTS / BACKYARD BABIES – Rockin’ In The U.K.! 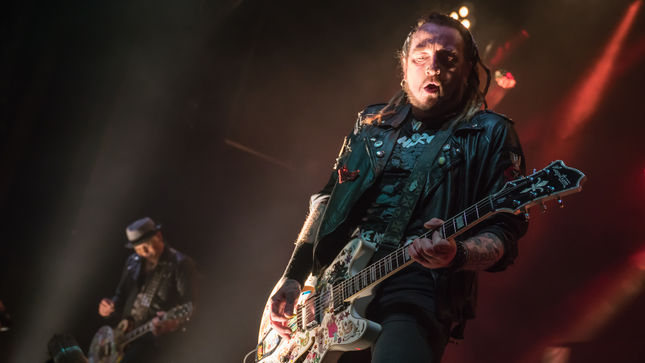 Newcastle is a city in the north of England, where people speak a language called Geordie and pint of beer in a pub still costs £1.99. One of the most famous products of Newcastle is The Wildhearts — a hard rock band that was started in 1989 by a guy called Ginger, and his friends. More than 30 years, nine studio albums and a myriad of singles later, the band is on the tour with Backyard Babies, rock/glam/punk from Sweden, with a London concert in O2 Forum Kentish Town on February 1.

Backyard Babies are not unknown to the U.K. hard rock fans — apart from being one of the most famous glam/sleaze rock bands in Scandinavia and winning two Swedish Grammy awards, they have toured the country more than once.

The Wildhearts and Backyard Babies play fundamentally similar, energetic, somewhat rock ‘n’ rollish, somewhat pop-ish (no offence) music, and they are old friends — you can hear Ginger on some of Backyard Babies’ records, so it was not a surprise to see them together on the same stage that evening, supported by CKY from Pennsylvania, US. All three bands delivered an awesome show to the delight of the full hall of metallers. CKY have ignited with flipping guitars. Backyard Babies could be hardly seen (but very well heard) in the fountains of green smoke. And The Wildhearts exploded with the true punk show, headbanging and jumping all over the stage. It was fantastic to see Danny McCormack, The Wildhearts' bass guitarist — a real miracle to see him on stage, given his past lifestyle.

The tour is finished now, but both bands have released new albums just last year: Sliver & Gold by Backyard Babies and Renaissance Men by The Wildhearts, so let's hope to see them again soon!