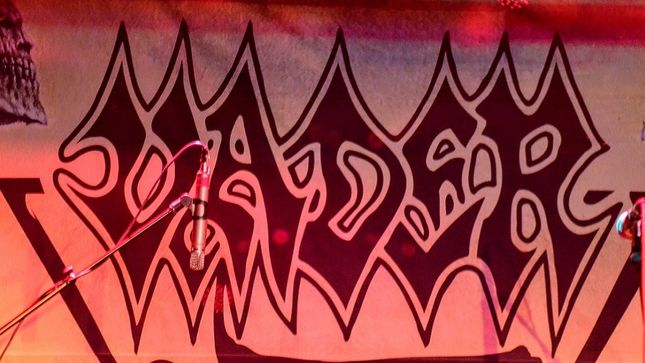 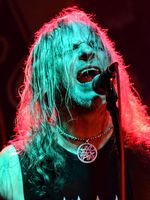 If their rhythm were a heartbeat, we'd be in tachycardia! Love 'em or hate 'em, the long running Polish death metallers stopped by the ultra-metal named Milkboy, on the eve of VD. Seen them on the 70K cruise and in front of thousands, at both Wacken & Summer Breeze, Tonight? Small second floor "alleyway" (at best 20 feet wide, less ,with merch stalls hugging the wall and stairs in the middle of the room), above an eatery. No photo pit in this small room, so had to shoot from the crowd. Good thing the beer prices were reasonable for Center City, plenty of $4/$5 options (mostly mass produced US products). Sadly, with the demise of the Trocadero, there's not too many rock joints left in Philly, few clubs amongst all the new glitz and glamour palaces (the Met, Fillmore, re-tooled Franklin Music Hall, aka Electric factory). Well, it was always more of a dance city anyway.

All the guys wore band shirts and/or patches, croaking, guttural frontman/guitarist Piotr Wiwczarek dressed in black cut-off tee. He remained virtually stationary throughout, not that there was much space to maneuver about. Marek Pająk (red & black tiger striped guitar) might be nicknamed the spider, but he bobbed his head for the whole evening, which began with "Silent Empire" also kicked off the second album, De Profundis. The old school thrash rhythm of Triumph Of Death" calls out for a (vicious) circle pit, but the sardine packed crowd wisely thought otherwise. Green lit "Litany", "Shock & Awe", a preview of the forthcoming Solitude In Madness and "Send Me Back To Hell" (an F-bomb inserted for effect, when Piotr introduced it) come in rapid succession.

Following "Wings", no real opportunity to do the "go off stage & come back for an encore routine", the band had to initially squeeze through the crowd, to just get onto the stage. So it was a rousing rendition of Judas Priest's "Steeler" to close things out. Great to see such an enthusiastic response to Vader, so hopefully it won't be long before they're back.