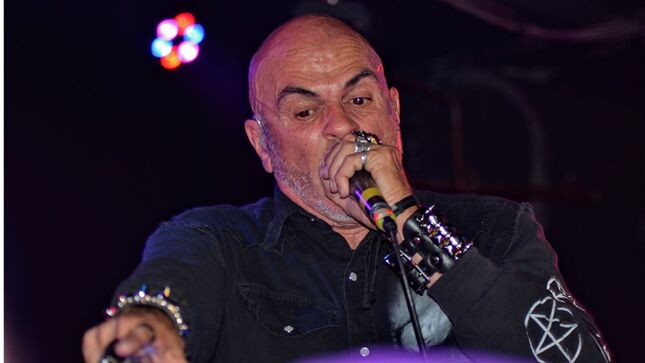 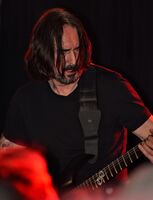 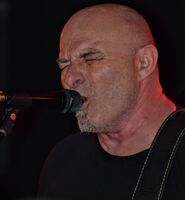 Drink it in! Not very often we get to sample such fine vintages, in one sitting. Sitting? Hell, no! Standing shoulder-to-shoulder, despite the City Of Philadelphia re-enacting a late May indoor mask mandate for schools. although other indoor establishments were still exempt. For the time being, the cavernous subterranean venue, aka Underground Arts, was transformed into an old school (read: pre-pandemic) club, complete with a triple bill of Eighties stalwarts. Time and location lucked out, as all were on their way to the Memorial Day weekend confab known as Maryland Deathfest, about two hours away. Few in Philly cared that this was a "warm-up" for the high profile gig. For most of the under 40 crowd, this was their first opportunity to witness rare US performances by Coroner (Switzerland) and Exciter (Canada). It was Dan Beehler & Co.'s first visit to the City Of Brotherly Love since the '84 tour with Motörhead and Mercyful Fate! 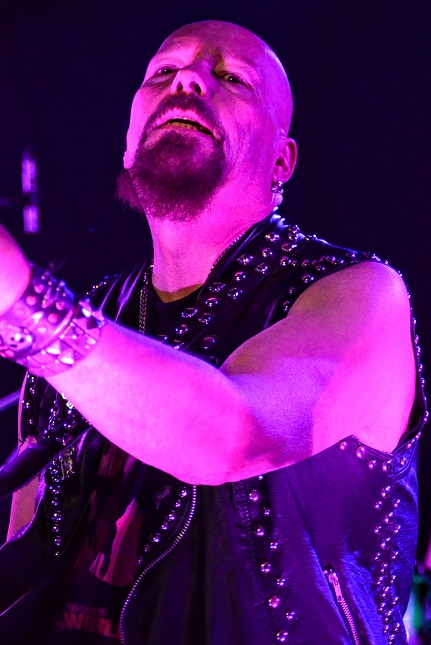 The promoter decided to test the aged crowd's endurance (concert Viagra anyone?) adding two openers to the four band package (Lich King was also involved), which kickoff off at 6:30pm. Metal dinner matinee... the line of early arrivals stretched around the block. Can't imagine the last time Beehler was this close to the crowd, on a small stage and no riser (playing from the floor). No matter. "Violence & Force" kicks things off, an apt moniker for the evening. "Stand Up & Fight" sees guitarist Daniel Dekay confronting the rabid throng (mosh pit broke out, almost from the word, "Go!") pressing close to the fans, straddling, or atop the stage front wedge monitors. "Heavy Metal Maniac" receives a thunderous roar of approval. Purple lit "Iron Dogs" has Dekay's hair flailing, as hunched over bassist Allan Johnson stalks the stage. Dan stands, to start "Rising Of The Dead", dedicated to the Old Bridge Militia men in the house. It's left to Daniel to headbang, although mid-song he plays his guitar vertically. Following "I Am The Beast", it's birthday greetings (albeit belated) for the bassist, then on to "Pounding Metal", where Johnson & Dekay come together, briefly, center stage. While original guitarist John Ricci loved to go off, grinding away on the whammy bar, during his noisy, distortion filled solo, Dekay does too. Unlike his predecessor, Daniel maintains contact with the audience, just an arms length away, they can virtually reach out and touch the guitarist. The histrionics leads into "Beyond The Gates Of Doom", summoning another circle pit. Without a barricade, photographing a band, from the pit, can be dangerous. While most are respectful, there's always (dunk?) someone who thinks it's cool/funny to slam into the "old guy with a camera." Dekay also has the chore of introducing the pair of (well known) bandmates, then segue into "Long Live The Loud". The guitarist again mounts his perch atop the monitors, when he solos. As it ends, he produces feedback by positioning the guitar towards the Marshall stack. Apparently the Canucks have adopted Motorhead's "Iron Fist" as a closer/encore. After all the years of dormancy, would prefer another Exciter original, instead, as greedy as that sounds. The song certainly fits the Exciter canon, concluding with Johnson repeatedly beating/punching his bass, as Beehler's voice hits a sustained high note finale. Damn shame the LD kept that annoying purple light on, all night. 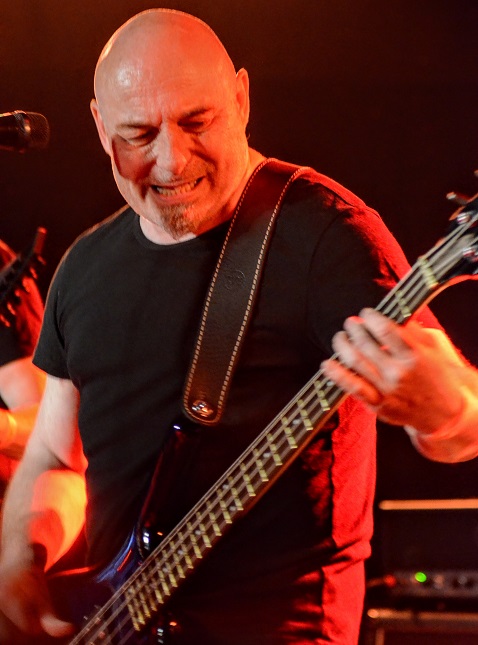 While Coroner were on the 70K Tons cruise a few years back, stops in mainland American towns have been precious few, even considering their 15 year hiatus. Their music is challenging (to listen to, as it is to play), at times, more prog than thrash (definitely true of the chugging "Metamorphosis"). Perhaps that's why Ron Broder (aka Ron Royce, bald bassist, singer) and bearded guitarist Tommy Vetterli (aka Tommy T. Baron) are quite static onstage. They've augmented the 80's sound to a fourpiece, utilizing an onstage computer/effects/keyboard operator (although precisely what he added to the dynamics, beyond the occasional backing vocal, I couldn't say: looked lost, with nothing to do, especially on the old school numbers). Although a career retrospective, the preponderance of the set was culled from the later discs (as opposed to the initial pair, here afforded just one song each!), which feature a more experimental bent. "Internal Conflicts" provides Vetterli a chance to show off his dexterous digits, in a brief jam with Broder. High pitched keyboard notes (veritable dog whistle screeches) hiss throughout. "Tunnel Of Pain" is as close to a rock star moment as the Swiss Blitz get. A massive pedal/effects array at his feet, the guitarist  indulges in a bit of a solo, speeding up and down the fretboard. Probably the fastest/heaviest number of the set, metalheads devoured  "Masked Jackal" as an old friend, Tommy (legs splayed) laying down some wickedly strangled guitar rhythms, with the same pre-recorded voiceover heard on the studio rendition, piped in, just for effect. The end of the proper set was tonight's third (and final) selection off Grin, the last full album of new material ('93): the titular track itself, subtitled "Nails Hurt". Announced as the first song off the debut, a pounding, red lit "Reborn Through Hate" is left until the end. Again, long on headbanging musicianship, it morphs into "Die By My Hand", to the delight of the fans, who are also simultaneously disappointed, realizing this marks the end of the show. With such a vastly diverse catalog, would be impossible to placate everyone's song choices. Still, there was quite a post-gig buzz, people stoked to have FINALLY witnessed the band live.

As if to reconfirm the point, a large defection after Coroner suggests who much of the crowd had come to see, but those that remained were treated to a vicious beatdown from Vio-lence, the perfect blend of the straight ahead bludgeoning and high brow compositions that had earlier graced the same stage. His health scare seemingly behind him, singer Sean Killian, looked like a metallic Nosferatu, in a black, cut-off vest and underneath, a long sleeve top, the arms emblazoned with pentagrams. Ready to kill (on command?), which he delivered, throughout, waggling his finger (and occasionally the tongue), like some sort of orchestra conductor, directing the bodily carnage in front of him. Precariously close to the rambunctious crowd, Killian was careful to avoid the odd stage diver (Yes Virginia, they still exist in 2022), practically goading the assemblage to go harder, faster. To his right was Phil Dremmel (last seen pitch-hitting in Over Kill) wielding a black Flying V, with white polka dots, the style made famous by Randy Rhoads. An electric fan billowed his hair. Ode to corporate greed "I Profit" (as relevant today as when first released, back in '90) begins the night, onstage and off a blur of activity. "Calling In The Coroner" (Hey, didn't they just vacate the stage?) was up next, the first of many off Eternal Nightmare. Bass rumbling intro signals the title cut from said album. The frenetic pace of the crowd ebbs and flows, slightly, depending on what's played (it's getting late and some have exhausted themselves), but the band continues clicking on all cylinders, especially skinsman Perry Strickland. Why isn't this guy a household word, like Hoglan, Lombardo, etc.? Dremmel begins "Phobophobia" with a guitar run. Once it truly kicks in, it's practically the soundtrack for a circle pit, the beat changes just enough that you can envision the dizzy participants speeding up/slowing down. Life imitates art (or vice versa).

Hard to believe, in 2022, seeing these bands (again), reliving our youth (theirs, as well as mine). Cheers!