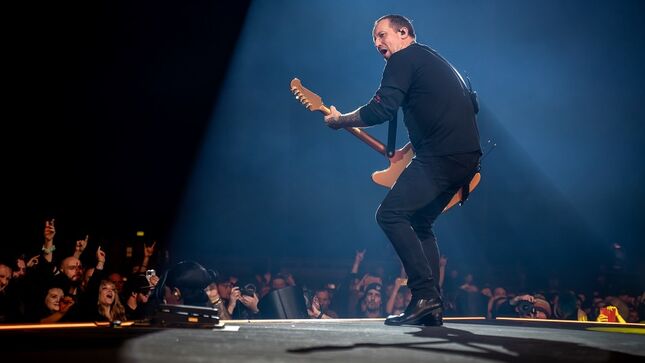 The evening of December 20 in London, UK, was miserable, wet and cold. Usually, on these winter evenings, the Londoners go home and cuddle with their barely warm heaters, but this night they had the option to enjoy some light dance music - and so they did by coming to Wembley Arena.

The party started with a short but energizing set from Napalm Death. Their logo patches were on every metal fan jacket for the last forty years, but it was still easy to believe you were listening to a school band on their first concert - not in terms of the quality of their performance, but the anger and energy.

Napalm Death played their "You Suffer" twice, which took them approximately 3 seconds. Other songs did not take them long either, and after a brief pause to refill beer glasses, Skindred blew up the hall with a machine gun burst of their hits, including "That's My Jam", "Kill The Power", "Nobody" and their latest  "Gimmee That Boom".

But soon, they handed over the stage to Volbeat. For the band it was the closing show of the two months long tour with 35 concerts in 17 European countries. The set list included some couple of songs from their recent album: "Temple of Ekur", "Shotgun Blues" and "The Devil Rages On", as well as numerous blockbuster songs accumulated over the last 20 years: "For Evigt", "The Devil's Bleeding Crown", "Seal The Deal" and many others.

But nothing lasts forever, even a tour's final show, and once the echoes of the last song of the day (it was "Still Counting", of course) have faded, the Londoners were forced back into reality of the London night, back to home and barely warm heaters...