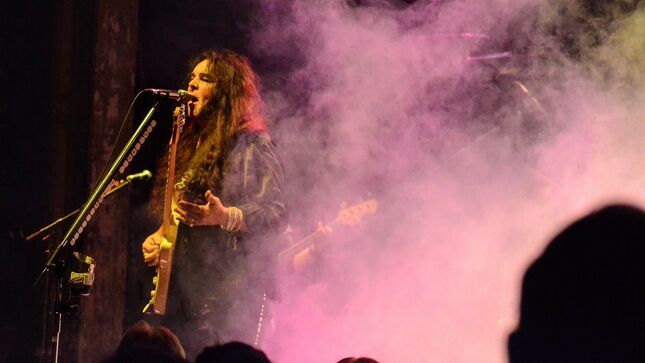 The Swede jokes that the Great Wall Of China and his massive onstage stacks of Marshall amps are the only structures visible from outer space. Both formidable facades, Malmsteen temporarily constructed his fortress at the Keswick Theater, on the second night of his Parabellum Tour. Like the omnipresent stone barrier meandering through the Chinese countryside, neighbors in the Glenisde, PA community (less than a half hour outside Philadelphia) knew the wall of amplification (55 Marshall heads, 20 cabinets) was there, they could hear it! Screaming guitar, stage shrouded in dry-ice fog (smoke shooting in the X &Y planes) and amps to 11, live music has become all the more special, post-pandemic hibernation: vaccine ID checks and mask mandates aside.

The Keswick is an old 1920s Vaudeville era theater, a seated venue, with large stage. Yngwie's merch (the usual array of music formats and apparel) was relatively inexpensive, at $30 a pop, for any of the three t-shirt designs and/or vinyl. Interesting how the set was constructed, with most of the stuff requiring vocals (some courtesy of the Maestro himself) up early and the instrumentals reserved for later. On his last North American tour (in '19) the vocals were kept to a minimum and provided by the bassist and/or keyboard player. However, the likes of "I Am A Viking" and "I'll See The Light Tonight" were part of that set. Not this one! That said, "Rising Force" opener, one of just a few ‘80s offerings, received a rabid response form the faithful soldiers. He came onstage chucking picks to the crowd, then would run back to his rig, to fetch another. Like a professional golfer using a new tee, on each hole, the guitarist switched from one cream colored Strat, to the next, on every song. Truthfully, shorter snippets segue into another tune, creating a non-stop barrage of guitar. 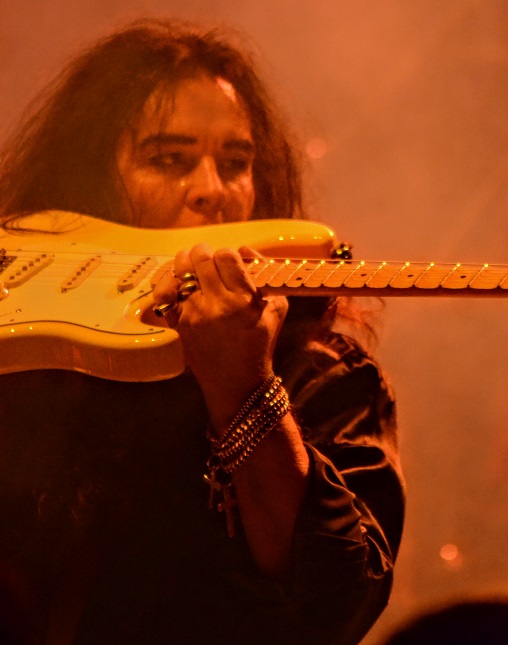 Throughout the show he pulled out all the histrionic effects: throwing and twirling guitar (horizontally), dropping to one knee, the other leg outstretched (which he made look easy, for a man of 58, although it played havoc on/destroying the 3-foot long, paper setlist taped to the floor, either side of his center stage mic), playing with his lips/teeth, spinning the six-string around his neck/body, high karate kicks, finger tapping and pin-wheeling hair, all the while, flicking souvenir picks to adoring fans. The visual accents don't mean a thing if you can't play. No worries there, as Malmsteen was searing up and down the fretboard, all night. Ala Warner Brothers cartoon, sort of expected smoke/flames to leap from his fingers as the pace enlivened. Under yellow and purple lights, Yngwie sang newbie "Relentless Fury", a hard driving number. The quick, triple repeating sequence, which starts chugging riffer "Wolves At The Door" on the current release, was reprised live. The drums are absolutely massive on this one. At its conclusion, the guitarist launched into a flourish, as a simultaneous vertical eruption of smoke plumed skyward. Yngwie finished with the guitar in his outstretched arms, overhead, a paean to the heavens. 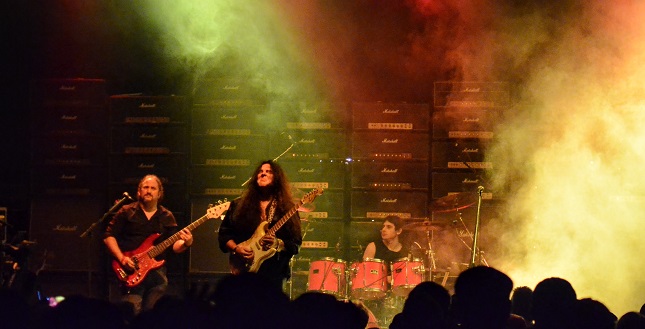 After a particularly speedy display of neoclassical technique, he announced, "That's a lot of hard work. A fucking lot of notes!" Doubtful anyone disagreed. A short baroque play-along, saw the rest of the band idle, as the master gave a tutorial in dynamics: going from almost complete silence to full-on, band bombast ("Far Beyond The Sun"). A solo rendition of "The Star Spangled Banner" had the other three musicians with hand over heart and offering a military salute, come its completion. At that point, the stage went black, piped in music offering an instrumental intermezzo. When they reappeared, Yngwie was at the mic, for yellow/orange bathed "Seventh Sign". Initially he provided the vocals, but was only back-up, by the second verse, the emphasis having shifted to the keyboardist. 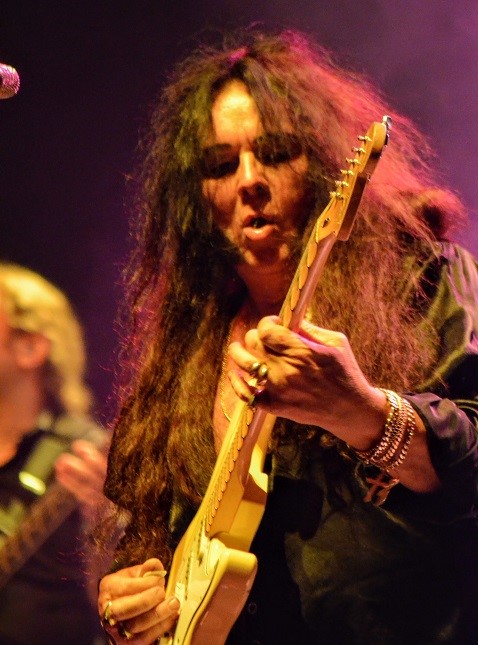 Somewhere between the music used in those old b&w, voiceless De Beers diamond ads, classical composers and metal, the speedy bouncy of "Evil Eye" was greeted like a long lost friend, especially to those of us who have been onboard since the (publicized) beginning: Steeler/Alcatrazz/debut. Malmsteen has acknowledged Ritchie Blackmore (Deep Purple/Rainbow) as something of a mentor (down to Fender guitar and selected color), so odd that an homage to the fellow guitarist would come in the form of "Smoke On The Water". Sure, it's easily the most recognized Purple number, to casual rock/metal fans, but also (somewhat derided for its rudimentary guitar work) as the "first" song beginning guitar students learn. Lots more fancy fretwork, including the short "Trilogy Suite Op: 5", aptly entitled bluesy selection and dual solos during "Fugue": of course Yngwie, but also a drum spotlight to Brian Wilson (of Miami based Midnight Spell). 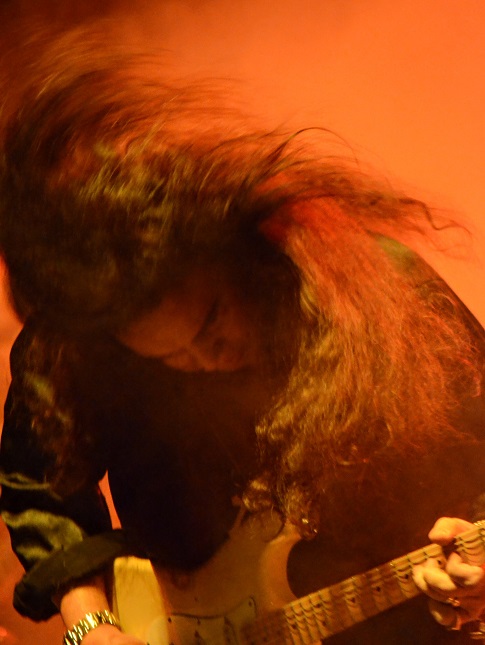 While the long await "You Don't Remember, I'll Never Forget" (absent from the opening night, in Atlanta) should have been enough to send those who remained, home satiated, the encore of acoustic begun "Black Star" was a bonus, parting "thank you." An emotive, mid-paced shred (if there is such a thing, THIS is it!). Afterwards, he stood alone, arms raised in victory, as the fans (as they had done, individually, throughout the night) collectively yelled his name, in adulation, "Yngwie!"