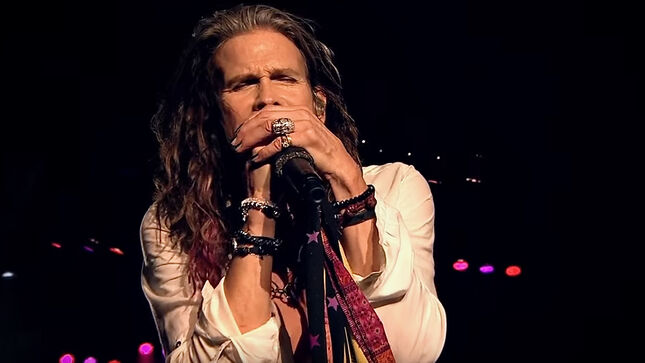 ComicBook.com's Charlie Ridgely is reporting that Rock 'n' Roller Coaster starring Aerosmith, at Disney's Hollywood Studios at Disney World Resort, is not only known for its high speed flips and blaring Steven Tyler vocals, but also for the enormous guitar that greets guests as they approach the attraction. For a while now, that guitar has been covered up and closed off as Disney worked to refurbish it and have it looking brand new. That process is finally complete.

This week, Disney dropped the covers and showed off the guitar's updated look. The red color on the guitar pops and the chrome is even shinier, making it look almost brand new. The Walt Disney Imagineering Instagram account posted some photos of the new guitar on Tuesday. Check it out below, and read more at ComicBook.com.

Recently discovered in the Aerosmith vaults, the original tape had not been touched in decades. This historic recording features seven extraordinary tracks showcasing the early, unbridled talent of the future Hall of Fame members including a nascent version of “Dream On,” which they would later record and release on their 1973 eponymous major label debut. Aerosmith is one of the few bands to chart with the same song 5 decades later, the song was a hit in 1973 reaching No. 59 on Billboard’s Hot 100 and re-entered the charts in 2020 at No. 4 on the Hard Rock Streaming Songs chart.

The Road Starts Hear, produced by Steven Tyler, Joe Perry and Steve Berkowitz, available on both vinyl and as a limited edition cassette for Record Store Day, features previously unseen archived photos, images of the original tape box, and liner notes written by Rolling Stone’s David Fricke with new interviews and comments from the band about this long forgotten recording. As an early treat for fans, the raw adrenaline of the 1971 rehearsal recording of “Movin’ Out” is available for streaming below.

The landmark early recording was made with Joe Perry’s Wollensak reel-to-reel tape machine in 1971 by Mark Lehman who owned the infamous van and became Aerosmith’s one man road crew, either in the band’s Boston rehearsal room in front of a few select friends, or at a rehearsal the band did during a soundcheck for an early show. All that is certain is that the tape captures a young, hungry rock band one year before being discovered and signing with Columbia Records and two years before their self-titled major label debut was released that helped catapult the band to one of the biggest rock acts of all time.

The Road Starts Hear features early recordings of gems such as  “Somebody,” “Movin’ Out,” “Walkin’ The Dog,” “Mama Kin,” and an early version of Aerosmith’s classic ballad “Dream On,” all of which would later be recorded for their landmark debut. Other tracks include “Reefer Head Woman,” which would later be recorded for their 1979 album Night In The Ruts, and the track “Major Barbara,” a song that would be featured on their 1986 release Classics Live.