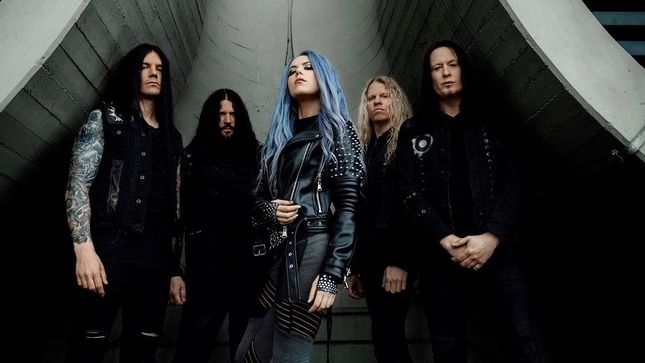 "I must admit that it feels somewhat surreal that the year 2021 marks the 25th anniversary of Arch Enemy," says guitarist and songwriter Michael Amott.

"I never imagined that we would reach a point in our career where we’d be looking back on two and a half decades of creating music, releasing albums and playing live shows all over the planet! It’s been an awesome experience, to say the least. As a group, we have been fortunate enough to achieve some incredible highs and accomplishments, but we have also lived through difficult times and lows. This is life, peaks and valleys… I have to say, whatever adversities we faced – we’ve always come through it all stronger than before. Overall, it’s been a great journey and one that I am extremely proud of. I wouldn’t change a thing."

"Obviously, the Covid-19 pandemic has prevented us from doing any elaborate grand celebrations of the 25th anniversary, but we are doing some special merchandise and some other cool things - so keep your eyes peeled for that."

"A lot of my memories about the earliest days of Arch Enemy are connected to Japan. The first trilogy of albums, Black Earth (1996), Stigmata (1998) and Burning Bridges (1999) were all released first in Japan and we toured there on all those three albums. Before much of the rest of the world really cared about us, we had gained a fantastic Japanese fan base that has supported us throughout the years – to this day. Domo Arigato Gozaimasu!"

"With the release of our fourth album Wages Of Sin in the early 2000’s, we famously changed singer, a dramatic change from the classic Swedish Death Metal voice of original singer Johan Liiva to Angela Gossow – an unknown female German vocalist. A new concept at the time, and a bit of a gamble... I remember not being sure how the fans would react to the big change in the band. The new music we had written and recorded was also in a more straightforward style and the overall sound was a somewhat new direction for us. I needn’t have worried, the “Wages of Sin” album was received very warmly by the fans in Japan, quickly becoming our biggest selling album there. But maybe more importantly, it finally broke the band into the international Metal arena in a big way. We found ourselves embarking on a rigorous touring schedule in Europe, USA and beyond. We had arrived!"

"One thing Arch Enemy always did was tour a lot, we strongly believed in building the band by proving ourselves on the live stage, city by city, country by country…one show at a time. We really loved performing the concerts and the touring lifestyle - we still do."

"Arch Enemy is always pushing to play new uncharted territory - we have on many occasions been the first Metal band to perform in a city or even country, which is always a huge thrill. Alongside building our own fan base on our countless headline tours and festival appearances, we also received fantastic opportunities with some of our early influences such as Iron Maiden, Megadeth and Slayer. They all brought us out as special guest on their tours, introducing us to their audience - for that we will always be thankful to them."

"In 2014 we released the War Eternal album and introduced our new singer Alissa White-Gluz to the world, kicking off a new exciting chapter in the evolution of the band. We hit the road harder than ever before, eager to show the world what the band could do with the new lineup. In the seven years that have passed since then, the band has grown far beyond my wildest dreams. Arch Enemy’s music continues to connect with new fans every day - it’s hugely inspiring and keeps us pushing forward."

"On a personal note, Arch Enemy has been my band, my passion as well as my work for half of my life now and I can’t really imagine what I would do if this band had not come to be all those years ago. I am eternally grateful to all the people that have helped us along the way in some way, shape or form... My dear band members/friends, all the people in the music business and underground Metal scene that believed in us, producers and engineers for making us sound great, our tireless road crew and all the ex-members of course. Most importantly, the incredibly loyal fans that we have, whom I’ll never be able to thank all in person. I can only promise that Arch Enemy will keep on making music (Yes, there is a new album on the way!) ...and of course we will be out there playing live shows as we embark on what will be our biggest tour ever! I am very positive about the future. Here’s to hopefully another 25 years! See you in the pit! Metal is forever!"

In celebration of their 25th anniversary, Arch Enemy will be bringing you strictly limited merch bundles for every studio album they've ever released. Head here to get your copy of the Black Earth bundle.