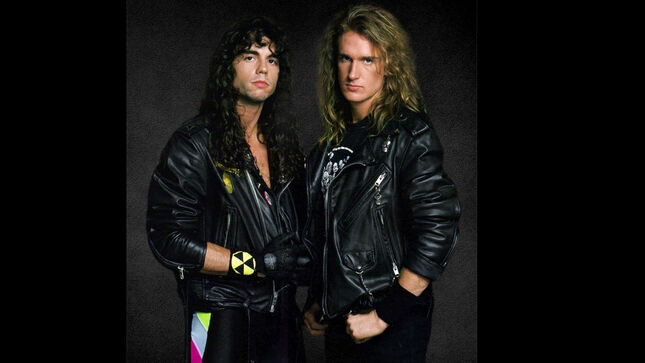 David Ellefson said: "So posthumously, we're actually forming a new band with Nick. I got a handful of different people from our industry and around the world participating in this and I'm going to be writing some new riffs and some new things."

Ellefson has now released the video below, from the studio where he's working on new music featuring Nick Menza's drum tracks:

All new tracks will be part of The Nick Menza documentary film, This Was My Life: The Story Of Nick Menza, being produced and directed by the Holly Mollohan of Screaming Butterfly Entertainment.

Ellefson has signed on as a co-producer of the film, and also will provide narration to guide the viewer through the exploration of the late Megadeth drummer's life.

A screenshot from the film was recently released that featured an interview with former Lamb Of God/Megadeth drummer Chris Adler.

"We are excited for the fans to see the life Nick lived before, during, and after Megadeth, it was quite the journey. Stay tuned for an epic documentary, as Nick would say, 'It’s gonna be rad!' Thank you everyone for the continued support in keeping Nick's legacy alive. Sincerely, Menza Family."