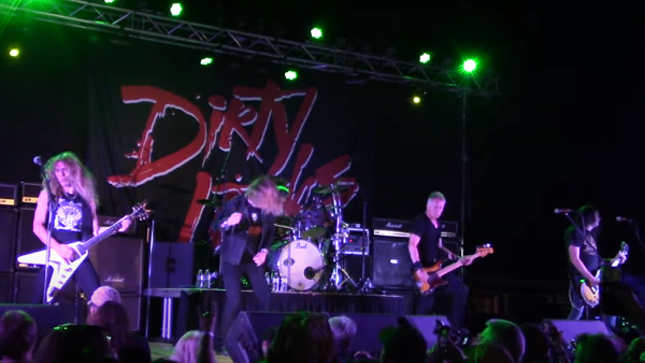 On the latest installment of the 80's Glam Metalcast, host Metal Mike speaks with Dangerous Toys / Dirty Looks guitarist Paul Lidel. He gets us up to speed on all the current activity from Dangerous Toys, Dirty Looks, and his band 99 Crimes. Lidel also shares some stories from the past,.

On his current activities

Lidel: "Dangerous Toys have been firing up again playing shows. We have dates all through this year, all the way into March of 2022. We have the Monsters of Rock Cruise coming up next year as well. A new Dangerous Toys album is in the works. There’s a whole bunch of songs that are written and we are in the process of writing some more. It’s a slow process, but it is going to be pretty cool. We also have just one show coming up as Dirty Looks (it took place on September 18th) with me, Jack Pyers on bass, and Gene Barnett on drums, and Jason McMaster filling in on vocals. We tried to do this in March of 2020, but it got cancelled because of COVID. We even tried to get a reunion show going back when Henrik was still alive, but we just couldn’t make it happen. So us playing again is something many years in the making. You never know, we may do some more shows with Dirty Looks."

Looking back on the Dirty Looks album Cool From The Wire

Lidel: "I wouldn’t have ever thought that all these years later that people would still care. We are happy to play the songs again....revisit them like old friends! At the time of Cool From The Wire, I was only 23 years old. Here I find myself next to producer Max Norman. He produced the early Ozzy stuff. Then it hit me, this guy produced Randy Rhoads....there’s no way he is going to be impressed by me! I think we got AC/DC comparisons because of the single 'Oh Ruby'. That song was AC/DC-ish and kinda pegged the band as an AC/DC thing. If people were listening to other songs, they would realize there were a lot of other influences on there. When I got in the band, I told people I joined the band that sounds like Accept. Some people have said we were like an Aerosmith - AC/DC hybrid...which is cool with me, they are two of my favorite bands."

On the Dirty Looks album Turn Of The Screw

Lidel: "It just wasn’t clicking with Beau Hill producing for whatever reason. Then we got John Jansen, who had produced Alice Cooper and a lot of other bands. He provided more of a raw sound. A little more of a stripped down production, like Highway To Hell. I think that sound works really well on that one, which is different than Cool From The Wire. I think I had more experience by the time we did Turn Of The Screw. I like my playing better on there."