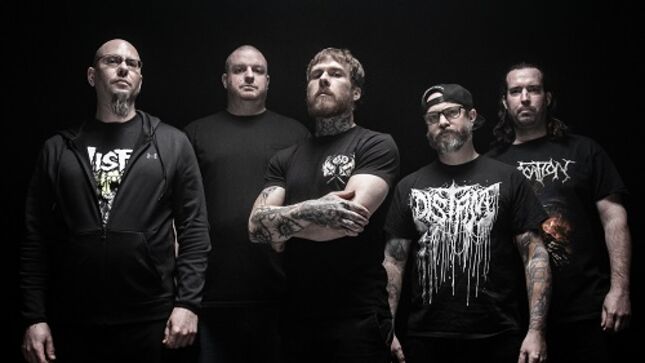 From the depths of the Niagara region in Canada, comes Eaten By Sharks with their new album Eradication, produced by Chris Donaldson (Cryptopsy). Initially, they were supposed to record in 2020, but those plans were dashed due to the pandemic. They are now ready to take listeners by storm with the follow-up to their 2013 debut, We’re Gonna Need A Bigger Boat, by starting with the single “Shallow Water”. Heavy odd-time beats swirl into catchy riffs, with sonic elements reminiscent of Meshuggah, Dethklok, and Dying Fetus. The first song on the album sets the scene for the nautical mayhem that echoes throughout the release. The band explains further:

“It was the last song written for the album, we already had most of the songs fleshed out for it. This song was thought of as a big ‘maybe’, due to not having much time to write it. However, it turned out to be one of those songs that flew together with little effort. It has an odd time swing to it that grooves and hits like a Mac truck. It then flip-flops between some harmonizing bridges, solos, and demonic typewriter-type polyrhythms. Matt then breathes life into the song with a bloody cove gone mad narrative. His vocal chops deliver some classic death vocals, mixed with some tasty staccato phrasing, fitting the instrumental structures perfectly.”

“Shallow Water” depicts the swift justice served up by sharks after humans impose on their homes. In its desperation to save itself, humanity forgets that there is always a bigger fish. The aquatic horror continues throughout the album, combined with punishing drum performances, unique guitar chords, and a progressive spin on technical death metal.

Eradication will be available on August 26, 2022. The cover art and tracklisting can be seen below.