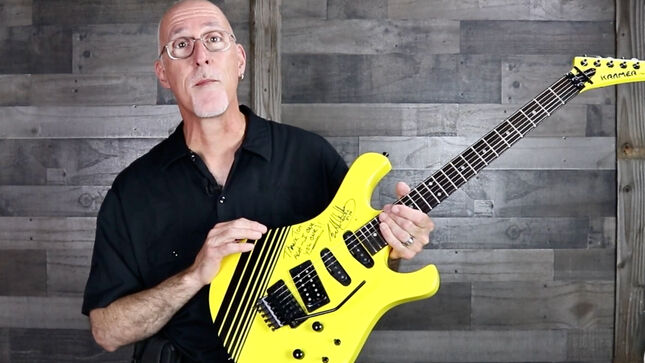 Five Star Guitars has revealed that Tom Weber, guitar tech for Eddie Van Halen from 2007-2020, is selling his prized possession - a gift from EVH representing the wonderful story that kicked off their relationship. After the COVID-19 pandemic eliminated all of Tom's work and income, he is hoping the sale of this guitar will help him keep his house and get him back on his feet in 2021.

About the guitar: Here's one straight from Mr. Mean Streets, Eddie Van Halen himself with a phenomenal story behind how it ended up in Tom Weber's hands, to Tom landing a once in a lifetime job opportunity, to finding its way into our shop.

You are looking at a 1988 Kramer Paul Dean signature guitar that was given to EVH's guitar tech, Tom Weber, over 30 years ago. Little did Tom know at the time that the guitar was given to him, that he would end up being the right hand man behind Eddie’s rig and setup. While working as a sound technician in Tennessee in the 1980s, Weber learned that Van Halen had recently damaged an acoustic guitar on tour — rumored to be a gift from Heart’s Nancy Wilson. He arranged to meet the guitarist backstage after a gig and presented him with an Ovation steel stringed acoustic from his personal collection as a replacement, a gesture of goodwill that stuck with Van Halen. Two weeks later, Weber received the surprise of a lifetime: the Kramer on his doorstep, signed by Van Halen with a heartfelt note of thanks.

“The Kramer represents the very beginning of my relationship with Ed,” said Weber. “I was lucky enough to develop a friendship with him, eventually winning my dream job — becoming his guitar tech from 2007 right up until 2020. He was a true original, and so was this gift he gave me. I’ve treasured this guitar for many years and now it is time for it to become the prized possession of another collector.”