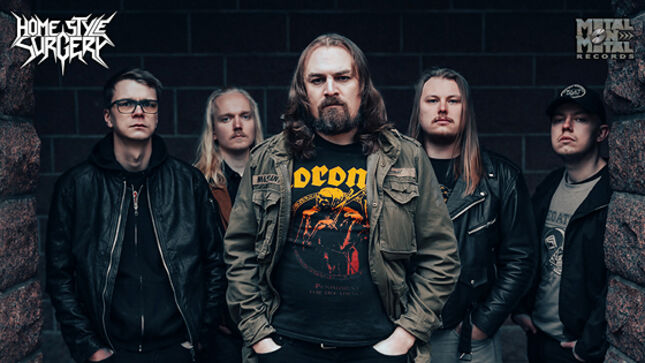 The band put a teaser for the album on their YouTube channel and the label featured a fragment of an exclusive song ("Subconscious Atrocity") from the same recording sessions that will be out on the Compendium of Metal Vol. 14 CD.

"We are happy to announce the signing of an exceptionally talented band which also happens to be the first Finnish band we're working with. Home Style Surgery have been honing their craft for 13 years now, so for as long as Metal on Metal Records exists, starting out playing raw speed/thrash metal and becoming one of the most impressive technical thrash acts we've heard. However, Brain Drill Poetry is only their second full-length, following multiple demos and EPs and 2018's Trauma Gallery CD released by Punishment 18 Records. Anybody who's into bands like Toxik, Stone, Forbidden, Coroner, classic Voivod, Annihilator or Despair should definitely check them out."

"Home Style Surgery is proud to announce that we have teamed up with Metal on Metal Records to release our new album Brain Drill Poetry. It has been a long process for us, but we are beyond satisfied with the result: songwriting is tighter, riffs are crazier and there is no slowing down in tempo either. Brain Drill Poetry goes to another level with new singer Kami (Brainthrash) who definitely brings a breeze of fresh air to our sound. There's no other album that sounds like it, yet you can still hear the various influences we had when crafting these songs."