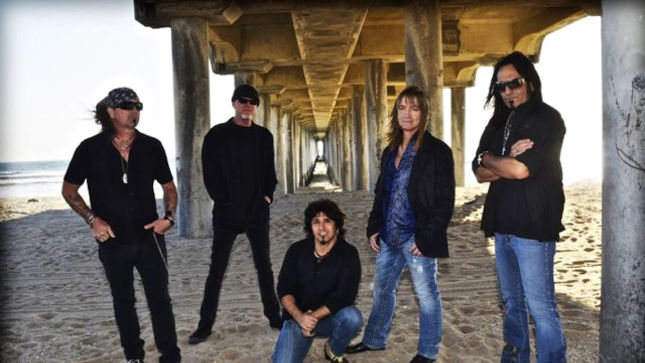 “We’re hoping to get into the studio in February or March to at least flesh out some ideas,” Great White guitarist Michael Lardie tells Dayton Daily News about the group’s follow-up to their last album, Elation.

“We’re always writing. Part of your gig as a musician is working on new material all the time. It might be something as simple as a riff or it could be a complete song that you just catalog away. Then we all get together to flesh everything out and see if it works within the framework of the Great White experience.”

As previously reported, Jack Russell’s Great White frontman Jack Russell is filming a documentary about the infamous fire that killed 100 people during a 2003 gig at a club in Rhode Island, reports Jon Blistein of Rolling Stone.

"It's a story of my life intertwined with the story of the fire," Russell said of the film during an interview on Portland radio station 105.9 The Brew. "It's really hard, you know, but it's going to give me a chance to apologize and say how I feel about it. I never had the chance to say, 'I'm sorry.'"

The fire at the Station club in West Warwick, Rhode Island broke out when the band's pyrotechnics display ignited flammable soundproofing foam installed in the venue. Over 200 people were injured, with Great White guitarist Ty Longley being among the 100 fatalities.

While Russell was not charged, he and Great White did settle a $1 million lawsuit with victims of the fire, which was part of an overall $176 million settlement fund. Those who were indicted included Great White's tour manager, Daniel Michael Biechele — who was operating the pyrotechnics without a permit — and Jeffrey and Michael Derderian, the brothers who owned the Station. All three struck plea deals, with Biechele and Michael Derderian serving prison time.

Russell did not offer any details on when his documentary would be released or if he plans to donate the proceeds. Further details can be found here.