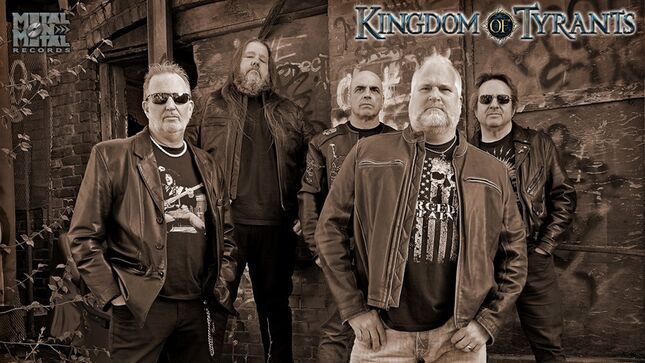 Metal On Metal Records have announced the signing of a new US power/heavy metal band from Boston, MA, Kingdom Of Tyrants featuring members of Meliah Rage and Steel Assassin. The band's debut album Architects Of Power is scheduled for the release this November.

To get an idea what to expect, check the video teaser featuring an excerpt from the track "Daedalus" which will be released in this rough mix version on the label's new compilation CD Compendium of Metal Vol. 15 in September.

"We are proud to announce that Kingdom Of Tyrants, a brand new band comprising veterans of the Boston area metal scene has joined our roster. It was in March 2021 when our friend Anthony Nichols (Meliah Rage guitarist) told us his old band mate Mike Munro and Stu Dowie teamed up with two Steel Assassin guitarists to work on a new project. Being big fans of both bands, we were naturally very curious about the results of the collaboration of these talented musicians and really excited to hear Mike's awesome vocals again, so we contacted the guys and started talking, but it wasn't until almost one year later that we finally got to hear the first tracks. As expected, the songwriting was top-notch, while the style classic heavy metal with a bit of US power, so that was enough for us to know we definitely wanted to release their album."

"Kingdom Of Tyrants is very pleased to announce signing on with Metal On Metal Records for the release of their debut record Architects Of Power. The band features former Meliah Rage vocalist Mike Munro, drummer Stu Dowie, and former Steel Assassin guitarists Kevin Curran and Mike Mooney. Long-time friend of both bands and musical cohort Dave Liolios takes the helm on bass guitar. The band looks forward to the collaborative effort with MOMR and is extremely excited to join the label and introduce their new compositions to metal fans worldwide."