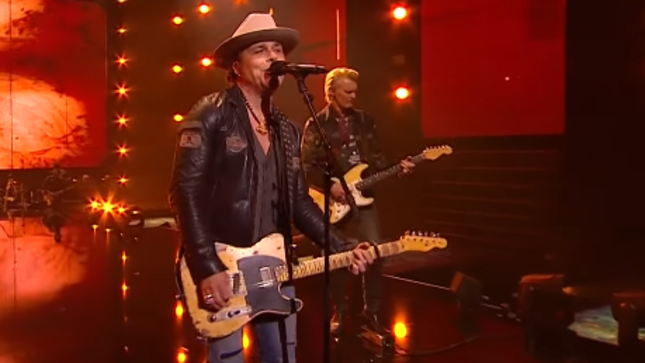 Singer / songwriter / guitarist Mike Tramp (White Lion, Freak Of Nature) has entered his new single, "Everything Is Alright", into the Eurovision Song Contest representing Denmark. Last night, he performed it live for the television audience.

Tramp says, "Saturday night y'all heard how my music sounds and who I am. Not the guy you thought I was, not the guy from the old days. But the way Mike Tramp has sounded the last 25 years on my 12 solo albums and thousands of concerts. Many of you also know that I can only speak the truth and be who I am, no form of compromise."

"I always saw DMGP as a TV show where I could perform my song with a great band and a perfect TV production. I thank all the great musicians in the band, and everyone in the technical department at DR. You are kings and you made me king on TV Saturday night.
Mike Tramp doesn't belong in the Eurovision Song Contest or what you call it today. I would have fought against everything they would ask me for, anything they would try to get me to. I would have been negative in the press and did my best in being a third rank Johnny Rotten, who did his best in engraving something that has run so far away from what it once was."

"Friends, everything is still alright. There's no retreat, there's no surrender. Rock 'n' roll do not bow and obey to anyone."

Tramp previously stated: "Most of you on the other side of the ocean might not be familiar with The Eurovision Song Contest. But Will Ferrell might have changed that with the Netflix movie, The Story of Fire Saga.

"Long ago it started out as test of songwriting, but as TV and visual took over, at times it looked more like Vikings or Games Of Thrones. Still at the end of the day, the quality and strength of the song is what will decide if it survives once the Dragonfire has burned out. I hadn’t planned to be part of this song contest, but knowing that for the past 25 years, since I stepped out as a solo artist and stood my ground and been true and loyal to my songs and who I am.

"I have written 'Everything Is Alright' like I write my other songs, for me and for you. And when I step out on stage in front of lights, camera and a TV audience, I will approach it like I have every time I’ve taken the stage the past 10 years. Except I won’t be selling  my T-shirts and albums after the show. Enjoy the song everyone, it’s only rock’n’roll, but rock’n’roll is my life."