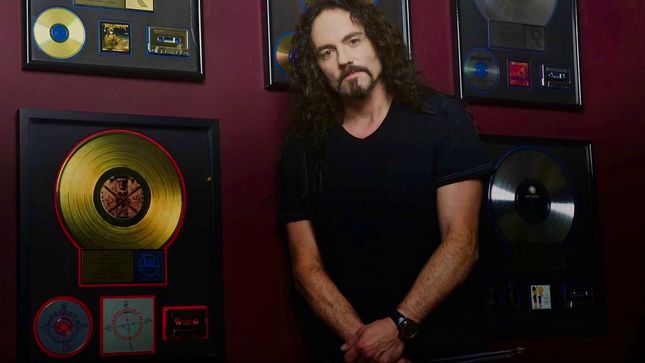 An official second trailer for Megalife: The Autobiography Of Nick Menza by J. Marshall Craig featuring unreleased drum-cam footage of Menza during the 1991 Clash Of The Titans Tour is available below. The book was released on December 11th via Post Hill Press.

Limited to 125, the premium bundle includes: Limited edition Nick Menza remembrance t-shirt / transparent vinyl, sticker decal and the 240-page paperback of the uncensored story of one of rock’s greatest drummers who died doing what he loved best.

An official book synopsis reads: With Nick Menza behind the kit, Megadeth transitioned from celebrated cult band to international superstars. Rust in Peace, the first album to feature Menza and Marty Friedman, was instantly considered a classic, sold over a million copies, got nominated for a Grammy Award, and established what many consider to be the definitive Megadeth lineup. It was the beginning of a remarkable run in which the band would release three career-defining albums and tour the world many times over.

Success was a rollercoaster ride of highs and lows: sobriety and addiction, peace and tension, laughter and anger. Until one day it all came crashing down. Despite his contributions to the band’s most iconic and enduring work, when Menza was forced to seek treatment for a debilitating tumor in his knee, he awoke from surgery to learn he was being fired from the band by the man he considered a brother and mentor, the ever-enigmatic Dave Mustaine. The devastating news sent him into a spiral of anger and frustration, followed by a dark period of self-medication that nearly killed him.

Megalife: The Autobiography Of Nick Menza is an unflinching look at life inside of one of metal’s most successful bands, from the back of the stage to the bunks on the bus, as well as a blow-by-blow account of the tumultuous, complicated relationship between Menza and Mustaine. It is also the singular story of a self-taught musician who achieved his dreams through sheer will and determination, watched it all disintegrate, and then rebuilt himself from scratch.

J. Marshall Craig previously stated: “I spent a year living with late, great, heavy metal drummer Nick Menza at his home in Studio City, California, trying to get the enormously private and proud man to open up and let me write his story. A story of the heights of rock and roll stardom, dreams come true and dreams shattered. We spent a lot of time talking, listening to music, playing music, and even began filming a drum-clinic video that comprises the final chapter of his book.

“On May 23rd of 2016, Nick was preparing to visit me here at my Cape Cod home and publishing offices for the final round of interviews on a project that was nearly four years in the making. Tragically, Nick didn’t make it. He died two days before, almost instantly from a massive heart attack, while on stage at the Baked Potato with Chris Poland and Robert Pagliari in their band Ohm.”

)rder the standard edition of the book at Amazon.