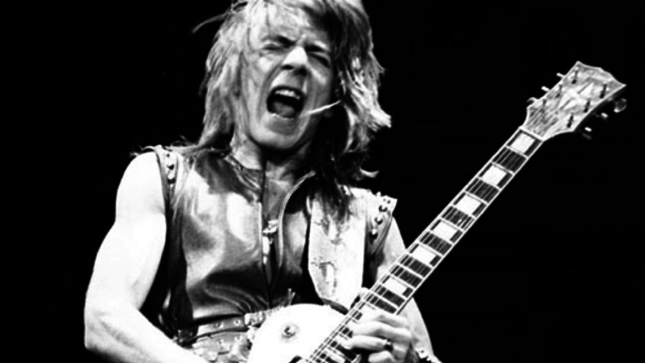 According to a recent report by Law 360 - found at this location - a California appeals court ruled Monday that the authors of a book on deceased Ozzy Osbourne guitarist Randy Rhoads had a First Amendment right to publish it despite claims by Rhoads' family that they used materials provided solely for a documentary film.

The three-judge panel's ruling reversed a lower court's denial of a motion to dismiss claims of fraud, invasion of privacy, misappropriation of names, voices and likenesses and unfair competition leveled against television producer Peter Margolis and co-author Andrew Klein.

Courthouse News Service is reporting that the authors "prevailed on all but one count in a fraud and privacy invasion complaint from the guitarist's family."

"The claims the family asserts relating to publication of the book involve only a minuscule amount of the material gathered," Presiding Justice Dennis M. Perluss wrote in the unpublished opinion. "Much of the information regarding Randy was already available in the public domain."


But the Rhoads family can pursue its misappropriation complaint against the four defendants for using unauthorized material, the three-judge panel ruled.

Margolis works in television production and was a former guitar student of Rhoads'. In 2006, he pitched the documentary idea to Rhoads' family and agreed to produce it, Judge Perluss wrote.

While working on the documentary, Margolis asked Klein for help, and the two completed more than 100 interviews and obtained numerous photographs and video clips in two years. When they saw the documentary's initial version, Rhoads' family said they weren't happy with the quality and were surprised to learn that Margolis had not obtained the releases needed from Osbourne to use his music in the documentary, the judge wrote.

While the documentary underwent additional editing, Rhoads' family said, Margolis and Klein began working on the book without telling the family. The family said it had given Margolis and Klein access to personal photographs, Rhoads' original music equipment, personal effects, autopsy report and other items. They also introduced the pair to Osbourne and his wife, Sharon, rock star Alice Cooper and others, Perluss wrote.

Go to this location for the complete Courthouse News Service report.

This isn't the first time the Randy Rhoads documentary has encountered controversy. Back in 2010, the webmaster for legendary bassist Bob Daisley (Ozzy Osbourne, Rainbow, Black Sabbath) issued the following statement:

"Bob has received several messages via his website, MySpace and Facebook pages regarding insulting comments written on a Facebook page by Peter Margolis, the director of a film about Randy Rhoads. The comments were recently removed but not before they were circulated and discussed on various forums by fans wanting to know what happened between Bob and the filmmaker to prompt such animosity.

The following comments were made by Peter Margolis: "I interviewed 2 people in Australia. One of them was one of the worst human beings that I have ever encountered in my years on this planet. The other was Scott Shelly, who was possibly the nicest person that I interviewed for the film."

When asked if Bob and Lee were going to appear in the Randy Rhoads documentary Margolis wrote: "I interviewed both Lee and Bob. Lee in England and Bob in Australia Lee was a really great guy. Does that answer your question?"

He was then asked: "Peter, I hope Bob wasn’t the other person you were talking about , when you stated that Scott Shelly was perhaps the nicest person you had ever met?" To which Margolis replied: "I met some of the greatest human beings while shooting this movie, and some of the worst. People that don’t deserve to occupy space on the same planet that we all reside on. That is all I will say on the subject until the film comes out."

If the rumours are true, we may be in for a long wait to hear more ‘on the subject’ from Margolis. Fortunately, Bob has agreed to speak out and tell us exactly what went on during his involvement with the makers of the Randy Rhoads Documentary."

An excerpt from Bob's message reads: "In 2007 I was contacted by Peter Margolis requesting that at some stage I be interviewed for a film being made by Dakota Films about the life and times of Randy Rhoads. I forwarded the email to my manager, Drew Thompson and replied to Margolis's email saying that I would consider the proposal without saying that I would or wouldn't get involved. Drew Thompson in turn contacted Margolis as well, but because nothing immediate was to take place, he said we'd wait to hear back from them. Drew never did hear back from Margolis or anyone else. Kevin DuBrow (Quiet Riot) also contacted me via email with regard to the film. He warned me against getting involved with Margolis et al and told me that he was having nothing to do with any of them and that he thought the whole thing would be a fiasco. Kevin seemed to know more about Margolis and his cronies than anyone else I knew but unfortunately, I didn't get to ask him much more because by the time I'd had further contact with them, sadly, Kevin had died.

I agreed to talk to an affiliate of Margolis's called Andrew Klein on the phone about the possibility of me appearing in the film and eventually told him that I'd do a filmed interview which could be used in their movie. Being filmed isn't one of my favourite things, I did that really for the sake of Randy's story and to at least get some 'truth' out there in the public arena. I had many long 'phone conversations with Klein and relayed a lot of valuable information regarding many Randy-related topics such as the recording of Blizzard and Diary, Ridge Farm Studios, dates and events, the Osbournes, my personal rapport with Randy, the record company and management and various other anecdotes too involved to list here. I spent many hours giving them free information to help make Randy's story complete."