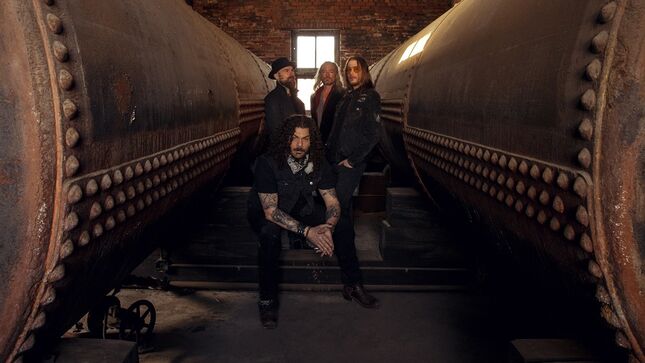 Singer Nathan Hunt shares, “Clint and I have been threatening collaboration for a long time now. Shamans has been a fan of his work since the band’s inception, so you can imagine there being nerves going in, but it felt like writing with a band mate. We both belong to the same tribe of Lumbee that hail from Pembroke, a place where ya can’t throw a stone without hitting a Lowery or a Hunt, so we’d talk about family ties and occasionally lay down a part. He came in with a fantastic slinky riff and a theme I got behind immediately and we were off writing.  The melody feels carnal and gritty. It’s a Shaman’s Harvest tune with a twist. I’m stoked for the world to hear a rock song a couple of old Lumbee dudes wrote in an afternoon in St. Louis.”

The band will tour as direct support for Theory Of A Deadman from February 15 through March 13. The band will also appear at Welcome To Rockville in Jacksonville, FL on Thursday, May 19 with KISS, Five Finger Death Punch, Papa Roach, Mammoth WVH and others.  A complete itinerary follows below. Hunt offers, “Finally we can get back to doing the thing that called us to music in the first place. Connecting with lovers of music in a way you only can by playing live shows. And we get to start off the year with a group of guys we respect and dig playing with. I think if we can take all the necessary precautions and keep the tour gods on our side, we can be a part of making ‘22 the year we all deserve.”

The lead single titled “Voices” is climbing the Active Rock radio charts and can be previewed below:

Shaman’s Harvest is honored to share that both “Bird Dog” and “Red Hand Black Deeds” will be featured in the upcoming feature film The Last Victim starring Ron Perlman and Ali Larter.

The band has released six albums prior, with a combined 250 million plus streams their repertoire.  The majority of those are in the U.S., with 200 million plays. Europe accounts for 45 million, with other continents amassing the additional 5 million. To date, Shaman’s Harvest has sold over 100,000 albums and 415,000 singles.  At radio, the band’s last album yielded two Top 30 Active Rock singles in “The Come Up” and “Devil In Our Wake.” The prior album, and first with Mascot Label Group, Smokin’ Hearts and Broken Guns enjoyed massive success at the format with four Top 40 Active Rock singles, the highest chart position being #11 with “In Chains.”

They have toured with a who’s who in Rock, amongst whom are Godsmack, Nickelback, AC/DC, Cheap Trick, Alice In Chains, Shinedown and Seether alongside others. They’ve been a consistent draw at festivals that include Rock On The Range, Rocklahoma, Carolina Rebellion, Rock USA, Rockin’ The Rivers, Rock Carnival, and on the Shiprocked cruise.

May
19 – Jacksonville, FL – Welcome To Rockville

“Under Your Skin” lyric video: