SLASH - "When I First Heard The VAN HALEN Debut Record, It Really F@%ked Me" 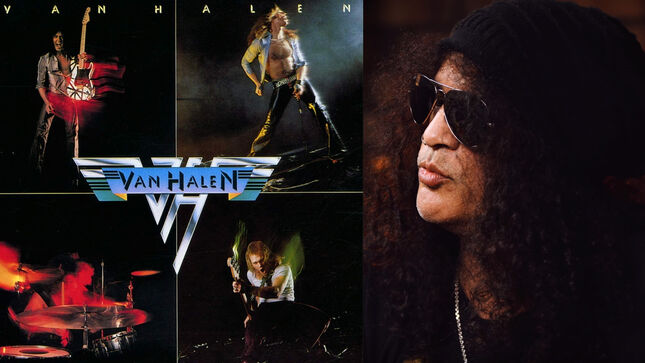 Slash Featuring Myles Kennedy & The Conspirators will release their new album, 4, on February 11 via Gibson Records, in partnership with BMG.

Slash joins Dave Cobb on the latest episode of Southern Accents Radio on Apple Music Country to discuss his forthcoming album. Slash discusses following in the footsteps of Van Halen and Led Zeppelin in titling the album, recording live in the room in RCA Studio A, why he loves the late Eddie Van Halen, how Cream’s 'Disraeli Guitars’ made him want to pick up the guitar, and more. Read a couple of excerpts from the chat below...

Slash on naming his upcoming album 4, and following in the footsteps of Van Halen and Led Zeppelin: "

Slash: "Well, I mean really what it came down to was that 2020 was such a hellacious year in every respect that I didn't think that any kind of remark or sentence or a phrase really would encapsulate the feeling for everything that had gone on that year. And so I didn't want to try and have some clever kind of quip or whatever, because I usually do, but there was just too much. So I just said, "Fuck it. Let's just call it 4. That way it doesn't try to say anything. It doesn't try to be anything other than what it is and leave it at that."

Dave Cobb: Well, you won for me because Van Halen had numbers, Led Zeppelin had numbers. I mean, come on, man. It's bringing back the old style. I love it.

Slash: "Yeah, I wasn't really following the trend consciously but it is sort of cool. I think it's cool that just people will be forced to know that we have three other records."

On loving the late Eddie Van Halen, Slash reveals: "By and large, I really don't come from this sort of eighties shredding school of guitar playing at all. But when I first heard, along with everybody else, in 1978 and first heard the Van Halen debut record, it really fucked me. That was a heavy fucking record. I mean, that was the moment that the seventies just changed, that particular record. And as a guitar player, I was just a kid, I was just picking up the guitar at that time. I hadn't even started at that moment. I started like the following year, but when I started getting into guitar playing, everybody was trying to emulate Eddie and they were all sort of focusing on the obvious techniques and the fucking finger tapping and the harmonics and the tremolo bar stuff and all these really fucking great techniques that Eddie had. But the way that he did it was such a part of his personality and it was such a part of his melodic sensibility that it had this really sort of musical fluidity that nobody after that really ever came close to playing that style of guitar playing and so I always loved Eddie. And in between any of his very specific techniques, he also just had great fucking rock and roll lyrics, just really cool, bluesy, fucking rock lyrics. So, yeah, loved Eddie."

Listen to the episode in full anytime on-demand on Apple Music Country, here.

"The River Is Rising" video: