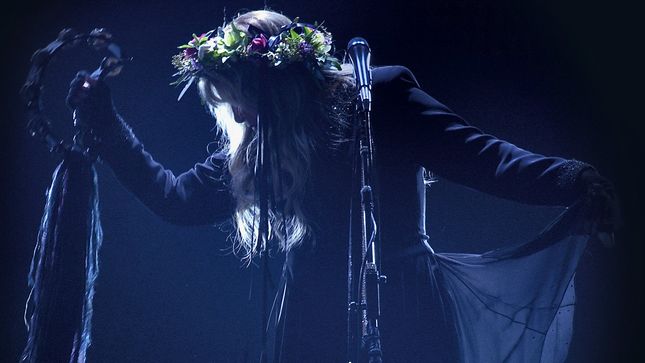 Following the success of Stevie Nicks 24 Karat Gold The Concert at cinemas worldwide, and in support of the release of Stevie Nicks’ 2CD & digital/streaming releases, this exciting concert film will be available for fans to rent at home on video-on-demand (VOD) for one week.

Pre-orders for the rental begin today at StevieNicksFilm.com. The film will be available to view beginning this Thursday, October 29 at 9 AM, PT / 12 PM, ET. Audiences will then have 48 hours to view their rental from purchase. The film will be available to rent until Thursday, November 5 at 11:59 PM, PT. This marks the first VOD release from Trafalgar Releasing, who are pleased to be collaborating with Stevie Nicks and BMG on giving alternate options for fans to be able to watch this film.

Stevie Nicks 24 Karat Gold The Concert was first seen in cinemas around the world last week on Wednesday, Octover 21. The film reached the number one spot in the UK cinema box office on the night of release. In the US, it reached the number two spot at the box office and the number one per cinema screen average for the night. According to movie ticketing platform Atom Tickets, Stevie Nicks 24 Karat Gold The Concert has received the strongest pre-sales to date on their platform for the month of October.

With this film Nicks, long considered one of the most iconic live performers, provides music fans with a virtual front row seat to the magic Stevie brings to the stage in concert.

The 2CD & digital/streaming releases will be available on October 30 via BMG, featuring 17 tracks of Stevie’s greatest hits live; including “Stand Back,” “Gypsy,” and “Edge Of Seventeen,” as well as the first ever live recording of “Crying In The Night,” and other live rarities.