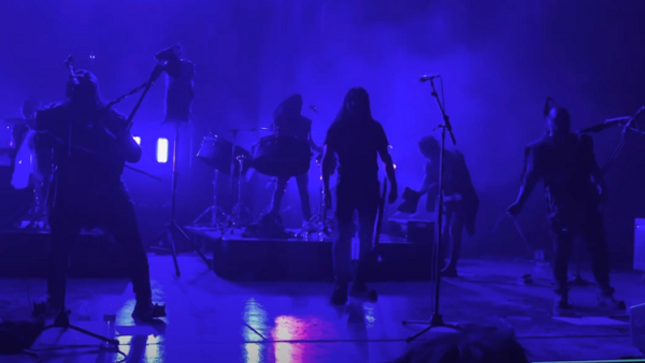 Mongolian rock band, The HU, is currently on the road in the US with their Black Thunder Tour with a series of headlining dates. It kicked off in San Diego, CA on April 16 and ends in Mexico City, MX on May 31.

Fan-filmed video from their April 19th show in Tucson, AZ can be viewed below.

The tour will continue to tease new music from The HU’s highly anticipated sophomore album, due later this year from Better Noise Music. The album was recorded in their homeland of Mongolia over the last several months, during which, the group gave an update from the studio to fans via their YouTube channel here. Fans can also expect special previews of the project with live performances of new songs that the group originally premiered on their North American 2021 tour. See a new Q&A with The HU discussing the album and touring below.

This past fall, The HU headlined a tour through North America after joining Halestorm’s headlining tour, where they reunited with frontwoman Lzzy Hale, their special guest on “Song of Women” from their #1-charting debut album THE GEREG. In addition to those tours, The HU also performed a slew of high-profile festival dates including Austin City Limits, Outside Lands, Rocklahoma, Inkcarceration and more, with the Austin-American Statesman giving a rave review for their ACL set, writing, “File this one under noise you didn’t think you needed. The eight-piece Mongolian band The HU plays its guitars with bows and man buns, with backing “whoa” chants and punishing drums…It’s music built on tradition with an eye on the past.”

Those dates coincided with The HU’s appearance on Metallica’s Special 30th Anniversary Black Album Reissue Covers Project, for which they covered the legendary band’s “Through The Never”. They appeared on the tracklisting alongside some of the biggest names in music - Elton John, Miley Cyrus, Yo-Yo Ma, St. Vincent, Phoebe Bridgers, J Balvin with the Neptunes, Weezer, and many more - who offered their own renditions of Metallica’s songs that originally appeared on the iconic LP.

The band is excited to share more news on new music and further touring in the coming weeks on their social media channels and encourage everyone to give them a follow so they don’t miss out on anything. 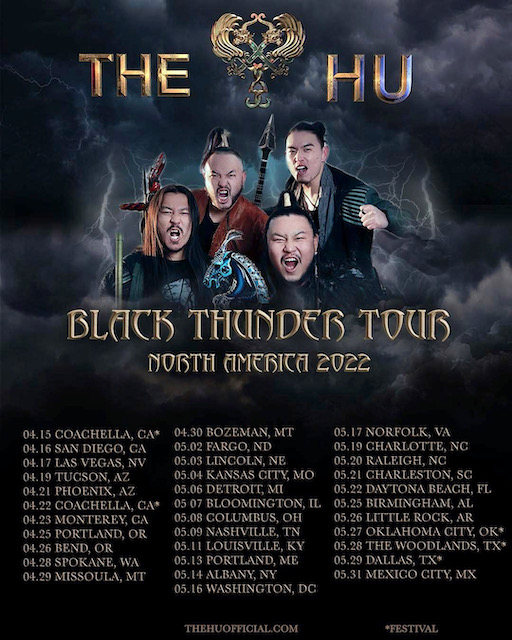 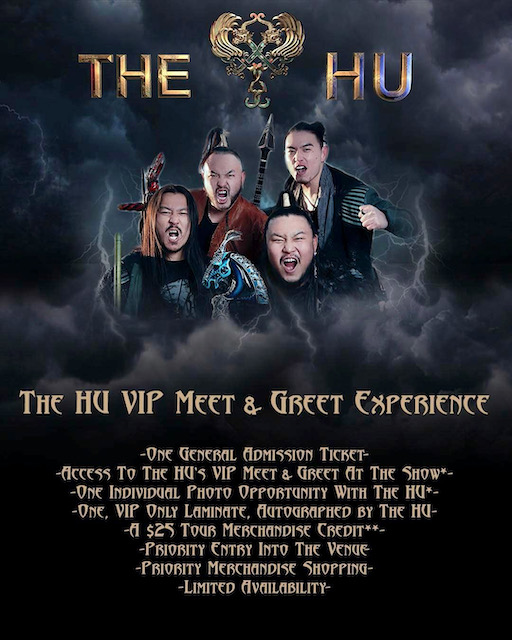 Q: Can you tell us which songs from the upcoming album will be performed on the “Black Thunder” tour, why you’re excited to play them and how they represent a new chapter for The HU?

The HU: "For the “Black Thunder” tour, we’re excited to be performing songs from our new album including “Mother Nature,” “Tatar Warrior” and “ShihiHutu.” We have been working hard on our second album and hope to have it ready soon. It will be focused on showing the unique qualities of The HUnnu Rock genre and consists of many new songs that reinforce the different aspects of it. So far we’ve been getting positive response from our fans and we can’t wait to perform all of our new songs for them."

Q: What inspired you to call the tour “Black Thunder”?

The HU: "We originated in Mongolia and through our music we try to make our fans feel the freedom and energy of the spirit of our vast land and high mountains. Likewise, the “Black Thunder” name is inspired by the unique scenery that can only be seen in Mongolia in which the thunder rumbles right before the rain in the high mountains, the number of clouds in the sky and the force of the lightning are heard, and seen many, many miles away We tried to communicate the energy and feeling you would get experiencing that and hence we named the tour “Black Thunder”."

Q: A Coachella performance is a prestigious booking since the festival has always stood for musical integrity. Can you discuss what it feels like to be performing at Coachella for the first time in your career? Are there any other artists you’re excited to see performing on the day you play?

The HU: "It is such an honor to be part of Coachella. We’re more than thrilled to be included and it has always been our dream to be performing on that stage representing Mongolia for the first time. We feel that it’s a great opportunity to meet with many of our loyal fans and artists that we love.  There are so many talented great artists playing on the day we perform and for the rest of the festival, and if we get a chance, we would love to see all of them."

Q: You’ve performed in many cities in North America. Can you tell us what it’s like to play for audiences here and how they might be different from ones in Europe?

The HU: "We’ve toured many cities and several continents and met with so many awesome people. Every place has its own characteristics that can be felt through their greetings, hand gestures and chants before, during and after the concerts. In that regard, we would say the biggest differences that we can recall would be the amount of people who would sing along and who’ve memorized the lyrics. Each continent has different accents on singing in Mongolian and we love all of our audiences and their uniqueness."

Q: What is your favorite part about touring North America? Do you guys ever have the time to explore cities on days off (restaurants, museums, etc.) and if so, what has that been like?

The HU: "Our favorite thing about touring in North America is visiting different places and meeting people. Not only do the restaurants and establishments differ, but each one of them has a unique style. On our days off, we’ve had a chance to taste the most amazing barbecue in Texas, Asian fusion mixed with Mexican spices and sushiritto, etc and explore around everywhere we go. Like their cuisine, Americans are always willing to go the extra mile to make people feel welcome and accepted - we’ve had many people guide us through their cities and towns."