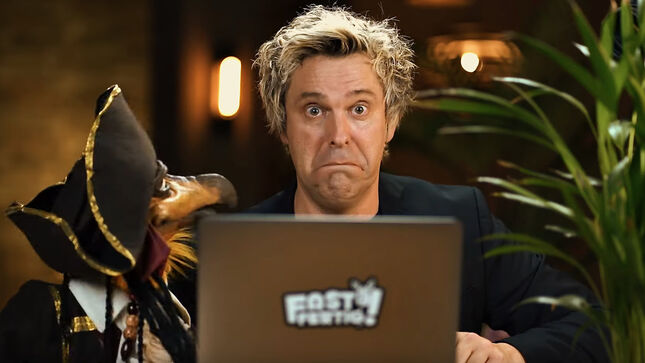 Fans of the German puppet comedy superstar, Sascha Grammel, have known for a while now: The likable ventriloquist from Spandau and proud creator of puppets and audience favorites such as eagle pheasant Frederic Freiherr von Furchensumpf, turtle lady Josie or ecotrophologist Professor Dr. Peter Hacke, is always good for a surprise.

Grammel swears by the music of German metal band The Unity to motivate him during fitness workouts. Apparently, his favorite track to sweat, cycle, run and lift weights along is "Close To Crazy". But that's not all! Grammel and his endearingly eccentric puppet flatmate now appear in The Unity’s latest video - and you can see they’re enjoying every second of it.

Referring to the unusual song title, Grammel's alter ego Frederic quizzes his boss in the video intro: “Did you write this song?” And counters Grammel's honest denial with, “But it would’ve been very fitting! You're close to crazy too!”

"Close To Crazy" (Live) is the forerunner to The Unity’s new live album‚ The Devil You Know - Live, which is due for release by Steamhammer/SPV on November 12, and includes recordings of concert highlights from their tours of Germany and several European countries between 2017 and 2020.

The accompanying video shows The Unity as comrades in arms with the two Gamma Ray members Henjo Richter (guitar) and Michael Ehré (drums, Primal Fear), alongside bandmates Gianbattista Manenti (vocals), Stef E (guitar), Jogi Sweers (bass) and Sascha Onnen (keyboards) at the Masters Of Rock Festival in the Czech Republic, where the band, as always, managed to thrill fans and critics alike.

The band will also be back on stage for the big release party of The Devil You Know - Live on December 25 & 26 at the Jahnhalle in Nordenham, Germany. Additional shows, festival appearances, and tours throughout Europe are also scheduled for 2022. And, who knows, you may even spot Sascha Grammel with his puppet family in the audience at one gig or another. Like all the best fans, they’re close to crazy, after all.

The Devil You Know - Live was recorded between 2017 and 2020 during tours through Germany and a number of other European countries, at shows in small, overheated clubs with sweat dripping from the walls, but also at big festivals such as the Masters Of Rock in the Czech Republic and in Germany at the Karlsruhe Knockout Festival and the Bang Your Head in Balingen. The tracklisting focuses on material from their albums The Unity (2017) and Rise (2018), but in We Don't Need Them Here also includes the single release from their third album Pride (2020), a song which was discussed controversially at the time of its release and was one of the highlights of their tour with Rhapsody Of Fire. Talking of which: The Italian band was only one of several renowned groups with whom The Unity have toured extensively. Just as unforgettable were their concert tours alongside Sinner, Edguy and Axel Rudi Pell, where The Unity presented their outstanding skills every night, advertising their subsequent equally acclaimed headlining tours.

The album was mixed and mastered by Achim Köhler, and the front cover courtesy of Felipe Machado Franco (Gamma Ray, Blind Guardian, Iron Savior) introduces The Unity’s new mascot Dave, who is honoured by the album title. Manenti ays: “There is an English saying: ‘Better the devil you know than the devil you don't’. We think this motto perfectly describes the situation the world currently finds itself in.”

The Devil You Know - Live will be released on November 12 via SPV/Steamhammer in the following configurations: