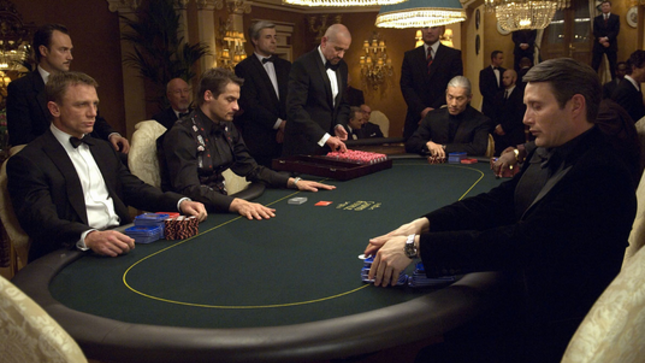 Are you planning a movie night with friends and looking for a poker strategy?

How about watching something that has joy, heartbreak, anger, excitement, apprehension, achievement – all, just name it!

From smoky bars to the luxurious backdrop of Vegas casinos, Hollywood showcases the thrill of gambling 100%. It's not a mere fascination with gambling that'll pull you to these movies, but an undeniable exposure to a rollercoaster of emotions that'll make you plastered with them.

21 (2008) - Where math professor Micky Rosa played by Kevin Spacey, together with his five brilliant students, showcases the skill of winning millions of dollars at blackjack.

And not to mention the brilliant performance of Edward Norton in a spectacular and authentic depiction of poker strategy and table banter in Rounders (1998).

If you want to explore casino games like poker, baccarat, roulette, blackjack, and more, there's no better way than watching Hollywood gambling movies.

But the issue is there are so many of them -  where to begin?

Well! Ask yourself what excites you the most!

If you want to get engrossed in the thrill and action of winning against an infamous financier of global terrorism in a high-stakes $115 million poker game, - watch the Bond movie Casino Royale (2006)

If you are a fan of sports betting, check out the electrifying performance of Paul Newman and Tom Cruise in 'The Color of Money' (1986)

If it's a stag night thing - why not enjoy 'The Hangover' (2009)!  It's a perfect American comedy movie about three buddies getting wasted and then tracing their steps through the wild stag party in Las Vegas.

Hollywood's long-standing affair with casinos and gambling has given movies in various genres - comedy, action, thriller, biographies, romantic-drama, crime-drama, road-trip movies, heist-movies, and so many more.

Some of the 60s and 70s classics - The Cincinnati Kid (1965), The Gambler (1974), or California Split (1974),  are a must-watch. These movies not only have some of the unforgettable performances of fine actors like Steve McQueen, James Caan, Elliott Gould, and George Segal but also have brilliant, gut-punching, and burningly-ambitious stories.

And it would be a sin, not to mention the multi-star casino heist movie - 'Ocean's Eleven' (2001). It became the template of a marketable and bankable heist movie of the 21st century. Getting away with $150 million in the biggest heist of history at The Bellagio, the Mirage, and the MGM Grand in Las Vegas, won't be easy. Watch it to determine if Danny Ocean (George Clooney) and Rusty Ryan (Brad Pitt) can get away with it.

Are you still thinking, which one to watch?

Don't get buzzin' to watch every Hollywood gambling movie!

A systematic study by NewCasinoSites highlights some of the best binge-watching worth 'Top 21 Gambling Movies'  Why not begin with them and enjoy the thrill first hand!

Even if you don't know much about casino games, you can still let these movies tide over you absobloodylutely.