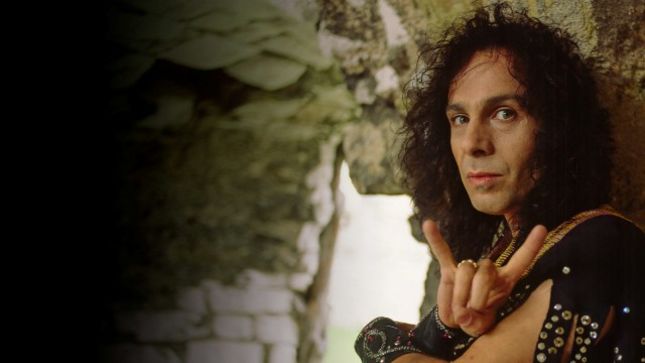 Ronnie James Dio's widow and manager Wendy Dio recently spoke with WSOU and offered an update and some details on the documentary about Ronnie's life and career that has been in the works for quite some time. As this is a fully authorized production, BMG is financing the film.

Ronnie James Dio passed away on May 16, 2010 at the age of 67 following a battle with stomach cancer.

Wendy: "It will go from Ronnie's childhood all the way through. I think they interviewed Jack Black, and I think they interviewed all of Ronnie's bandmembers and Doug Aldrich and, I think, Jeff Pilson. They were getting ready to go to Arizona to interview Rob Halford and Lita Ford, and then they were going into England to interview Tony Iommi. They already did Geezer (Butler). So there will be very interesting stories from different people. We were hoping it would come out early '21. I think it will come out in '21, but I'm not sure exactly when now because of the hold-up (pandemic). It depends on when they can go back to work."

News of Z2’s 2021 lineup begins to roll out with news of what is sure to be one of the publisher’s most anticipated projects yet - the Holy Diver graphic novel, creating an original storyline inspired by one of heavy metal’s most iconic album covers. Today’s announcement brings news that acclaimed horror comics writer Steve Niles will tell the tale behind the events leading to the powerful moment captured on the cover of Dio's debut album, definitively addressing 30 years of fan speculation. Why is the priest being thrown into the ocean? Who is truly the villain in this scenario? All of these questions are exclusively answered for the first time within the pages of this 120-page graphic novel.

“Steve Niles tells the story behind the album cover 'Holy Diver,’ a story about how you can't judge a picture by the way it appears, which is what Ronnie wrote many times in his songs; that you have to see inside the person and not judge them by the way they look or by what they wear,” says Wendy Dio. “Together with Scott Hampton's amazing artwork they tell the story of ‘Holy Diver', and I know Ronnie would have given his stamp of approval on this great graphic novel.”

“We have managed to work with some of the greatest legends in both comics and music, and a Dio graphic novel with a cover by the great Bill Sienkiewicz perhaps sums that up best,” says Z2 publisher Josh Frankel. “This is one of the most iconic heavy metal album covers in history. We are honoured to pay tribute to the originator of the universal sign of the music that he has inspired since he first took the stage with Black Sabbath 40 years ago. Working with Wendy Dio directly to ensure it is true to his vision is the next best thing to working with Ronnie James Dio himself, and we have hit a new high note with this one!”

In reverence, Steve Niles says, “I’m so excited to be writing this book. I hope I do Ronnie James Dio justice.”

Dio: Holy Diver reunites Steve Niles (Criminal Macabre, 30 Days of Night, October Faction) with Gotham County Line artist Scott Hampton for an all-new original story, inspired by the original iconic album art by Gene Hunter and Randy Berett. Two editions are available for pre-order now; both the standard graphic novel, as well as a limited deluxe edition, the full details of which will be revealed within the coming weeks. Dio: Holy Diver is available for pre-order now through the Z2 website. Dio's Holy Diver releases in summer of 2021.