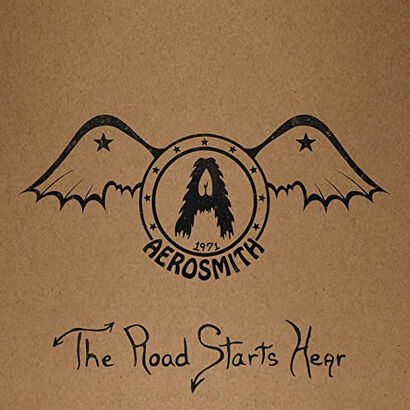 This rare recording from 1971 was recently discovered in Aerosmith’s Vindaloo Vaults and was originally only available as a limited-edition cassette and vinyl release for Record Store Day in 2021. Now, as part of Aerosmith’s 50th anniversary celebrations, The Road Starts Hear is available digitally and on CD. Captured on reel-to-reel tape a year before Tyler, Perry, Hamilton, Kramer, and Whitford signed with Columbia Records, and two years  prior to the release of Aerosmith’s self-titled debut album, The Road Starts Hear is a seven song rehearsal from the early, early days of these Rock & Roll Hall Of Famers.

The Bad Boys from Boston get warmed up with “Somebody” – a lesser-known song that sounds almost identical to “Mama Kin” – after which they break into the sultriest of smoky blues jams on “Reefer Head Woman”. Lovably raw in its dusty demo form, the cover of Rufus Thomas’ “Walkin’ The Dog” features an extended flute solo in a version nearly two minutes longer than that which appears on the Aerosmith album. “Movin’ Out” is unpolished, but incredibly close to Led Zeppelin. The harmonica that brings “Major Barbara” to life is a precursor of what would become a Steven Tyler trademark, and this initial version ends completely differently than the take found on Classics Live! from 1986. The legendary “Dream On” is a little rough around the edges; likewise, “Mama Kin” isn’t fully fleshed out either. Hearing such classics in their infancy is neat, but after a half-dozen spins, you’ll be back to the professionally recorded and produced studio albums.

The booklet accompanying the CD includes previously unseen archived photos, images of the original tape box, and liner notes written by Rolling Stone’s David Fricke with new interviews and comments from the band about this long-forgotten recording.