AGAINST EVIL - End Of The Line 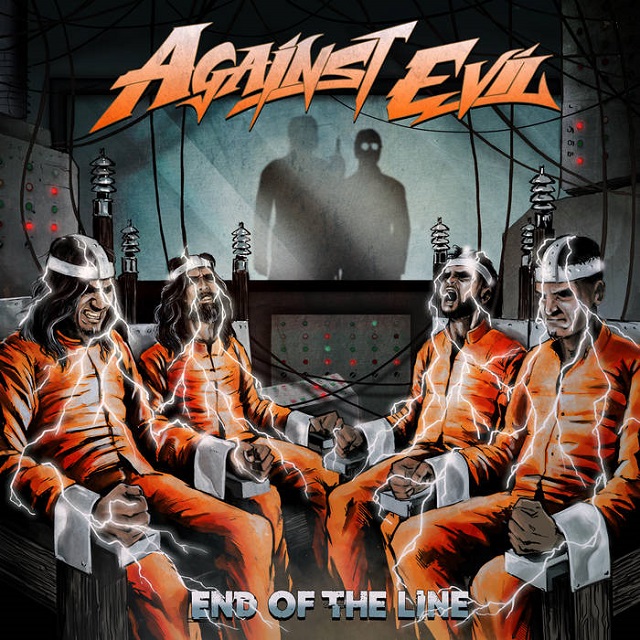 Personal choice for India's best hope to break through, to the big time. It's the third offering from the traditional minded outfit. Felt they stumbled a bit with the full-length that followed the excellent, 6-song Fatal Assault EP (which ended up on my Best of 2015 list), but the current disc (two years in the making) is the best yet. Hopefully the title is not prophetic!

While some of their countrymen have garnered (unwarranted) major international hype, plying music at the heaviest end of the metallic spectrum, Against Evil keep it under control and offer a real singer (as opposed to grunts/shouts): a rarely found asset. They have already released three videos from this album (maybe more by the time this is posted), so cross-reference the info below with the Net.

Opening with "The Sound Of Violence", the riffing guitars are at the fore, more so than most of the other tunes: aggro, but always tuneful. The pace picks up, on double bass drumming "Speed Demon" (surprise, surprise), locking into a hammering headbanging rhythm, with (a different) vocalist taking a lower (and more accented) tone. Love that song! Switching back to the smoother throat, there's the mid-tempo "Out For Blood", a straight ahead, old school heavy metal construct, apart from the Bill Sheehan (yes, Mr. Big/Winery Dogs/Talas) guest flourish. In a similar vein, albeit more of a call & response sing-along, destined for live/crowd interplay, is "Call To War".

Don't know about internal band politics, but for the international audience would curtail future contributions from the gruffer vocalist. Not bad, but nowhere as convincing as the clean option. Used as a counterpoint, alongside the normal voice, in the same song, OK, but not as the lead vocal. Bit of Manowar within the slow chug of "Metal Or Nothin'”: sonically, as well as lyrically: "Brothers around the world, Assemble to the call, Louder than the war, Bang your heads in galore, For metal we unite!" Is that a pun on Bangalore?

The album title, accompanying tune and cover art all tie into a spoken sound clip (judge passing sentence) that introduces "End Of The Line", a bouncy riffer. "Fearless" sees the return of the grittier singer, as the guitarist goes for a Satriani/Vai bit of showmanship: short, tasty and talented. Disc closer, "War Hero" stays in a rollicking Teutonic mid-tempo pocket populated by the likes of Running Wild, minus any seafaring antics.

With all the obstacles stacked in front of them, it's amazing that bands like Against Evil don't just persevere, but thrive. They deserve to be heard by discerning metalheads beyond their homeland, and if so, will undoubtedly be wholeheartedly embraced by the same. Highly recommended!