AGENT STEEL - No Other Godz Before Me 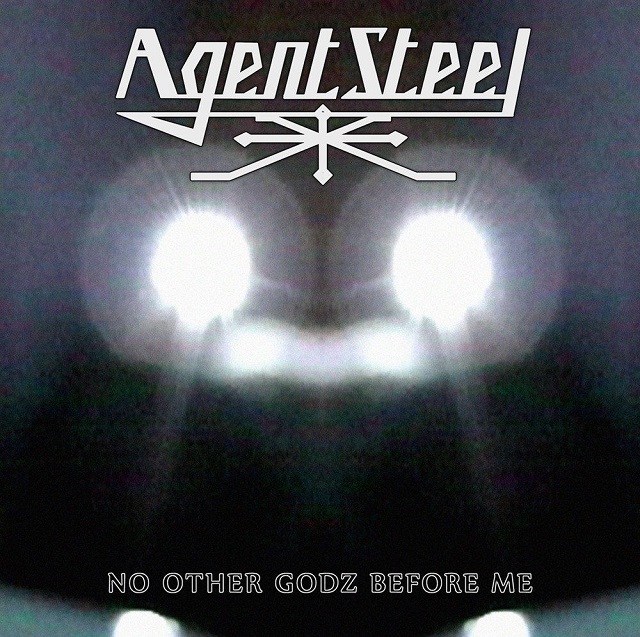 There have been many incarnations of the Agent Steel moniker since the Combat Records heyday (mostly under the auspices of guitarist Juan Garcia: Bodycount, Evil Dead, ex-Abattoir), but not since the ‘80s has the band featured vocalist John Cyriis, who now resurrects the name, albeit as the lone original/known member. First I've heard of the eclectic & reclusive frontman in almost a decade, after witnessing an intimate German club date for his S.E.T.I. project (a live gig that included more than a few Agent gems).

Long an avid UFO/conspiracy theorist, the lyrics again reflect his supernatural interests, delivered by his over-the-top/acquired taste, speedy, wailing higher pitched patter. Musically, it's highly technical speed metal (with, dare I say, the odd, neo-classical shredding flourish?). Would love to see/hear the blazing guitar tandem of Nikolay Atanasov and Vinicius Carvalho pull off these wild, frenetic runs, in concert. A cardiac failure inducing workout tape! Do not attempt to listen/keep up with the tempos, while exercising.

Technically, there are eight songs, amongst the ten compositions. The opening "Passage To Afron-V" and bookending "Entrance To Afron-V" outro are nothing more thanspoken word/sound effects laden "mood music" that brings the whole project full circle. There's also the partially Brazilian Portuguese sung, locomotive chug of "Sonata Cosmica", which references the aforementioned Afron-V (mad) locus (rising). In fact, none of the material exceeds 4:47 and each of the proper closing trinity are completed before the four minute mark.

A declaration of intent, "Crypts Of Galactic Damnation" unleashes a fury, as the nasal whine/wail sails overhead, at light speed. The title track is a diatribe about human foibles, swirling within six-string maelstrom. "That's just the tip of the iceberg. You're not the center of the universe." Apart from the break, "Trespassers" (about alien visitation/cattle mutilation in the UK) is predominately a Cyriis showcase. "There is no hope that humans can be trusted."

Standard ideas of melody have historically been hard to come by, in Cyriss' works, which is why the repetitive, headbanging "trick or treat" chorus within first single, "The Devil's Greatest Trick"(where a female vampire wreaks havoc on male victims) is so damn infectious. It begins to a mosh-able beat, but quickly diverts towards King Diamond territory, the comparison helped along by the singer's falsetto and LaRoquesque explosions of notes. Lots going on in "Veterans Of Disaster" (but then again, that's true of almost every cut).

With the crisp snap of military snare, "Carousel Of Vagrant Souls" is off. Later, in an instrumental dog fight, guitars dive and roll atop each other. Sung entirely in his native South American tongue, "The Incident" (relating the tale of an ETI encounter, where aliens stayed w/ the inhabitants of the town of Virginia, Brazil, for about a week, before the military investigated) features some speedy and twisted (or should I say "otherworldly"?) twin leads. The last proper track is "Outer Space Connection" a fairly by-the-numbers, old school thrasher.

In interviews, Cyriis has commented that an EP (tentatively entitled Sex, Love & Hate) will soon follow, with eight tunes already in the bag, for a second full-length (probably entitled Space Migrator) penciled for 2022 release. Watch the skies!