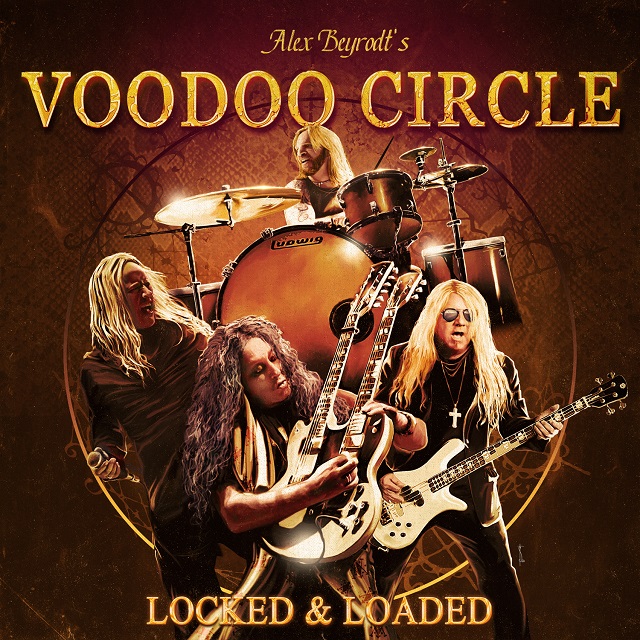 By his own admission, the return of vocalist David Readman (missing since '15 Whisky Fingers CD), prompted Primal Fear/Sinner guitarist Beyrodt to opt for a more Zeppelin approach on the Circle's sixth outing. Rest assured, it's not an overriding influence as previous touchstones, like pre-MTV Whitesnake and the German string-bender's obsession with Hendrix are just as readily apparent. To those a little slow on the up-take, Voodoo Circle ply a bluesy ‘70s hard rock, with the emphasis on guitar.

Out of the gates, a buzzing hornet's nest on "Flesh & Bone" displays Alex's fleet finger flourishes (adroitly ascending/descending the fretboard with equal aplomb), in an up-tempo context. The audible Hammond organ is buried in the mix. The ear-candy introduction to "Wasting Time" (plus tinkling bells throughout) may be a Led moment, but the lyrics are more classic Coverdale ("Bless me Father, for I have sinned"). A jangly begun "Magic Woman Chile" becomes a echoing, spacey trip, with recurrent utterance of the titular phrase. Never the biggest fan of Plant/Page, to these ears it recalls Strange & Beautiful era Crimson Glory (which was more of the former and none of the latter), which I understand was heavily influenced by the Brits' music.

Speaking of title numbers, synth laden and funky (almost danceable) "Locked & Loaded" offers the chorus: "Big boom bam, here for your Momma." Prominent Zep feel on "Devil With An Angel Smile" (watch out for THOSE women!), especially the guitar tone/chords features a stripper strut, plus ripping guitar break. "Straight For The Heart" could be a Snake outtake, an airy slice of hard rock. Another ballad, "Eyes Full Of Tears" initially has Readman a cappella. Mid-paced and meandering, apart from the pop keys, the guitar work in "Devil's Cross" owes a nod to Jimmy Page. Another bump & grind tribute to "bad girls", thumping "Trouble In The Moonlight" should come with a Coverdale seal of approval, although it's been decades since David's troupe strung together killer guitars like this one (probably since Sykes was in the band).

Is that a saxophone on vintage smoky lounge "This Song Is For You"? A sleepy, slice of blues (as Beyrodt's guitar gentle weeps). Disc ends with "Children Of The Revolution". Despite the oft used title, it's an original.

One for the older crowd. Check it out!