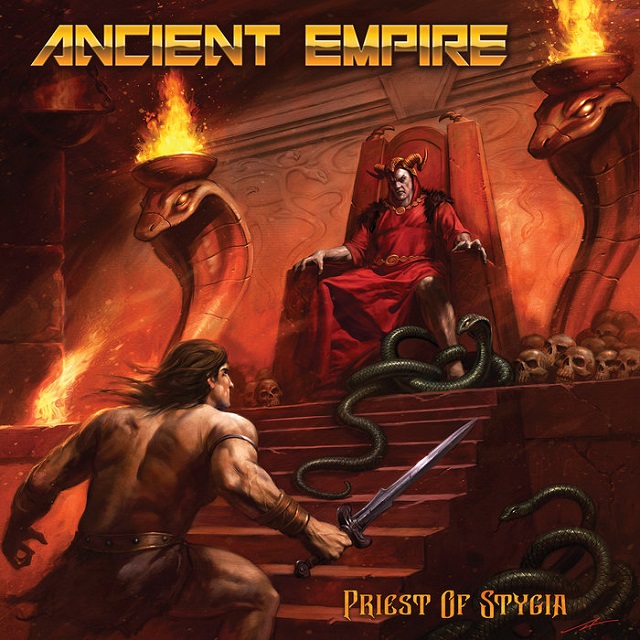 More like Priest of Judas (!), on this, the Northern Cali "band's" sixth full-length, in the last seven years. Don't let the bland/somewhat generic moniker dissuade you from uncovering this hidden gem. Essentially a two man project, that of singer/guitar/bass Joe Liszt (who moonlighted in fellow Stormspell artist Rocka Rollas, circa Metal Strikes Back), alongside drummer Steve Pelletier. Here he asked the ubiquitous Cederick Forsberg (Blazon Stone, Rocka Rollas, countless others) to add some solos and flourishes, but the calling card is a hard driving, traditional metal sound, over the course of eight songs: some of which are tied to the cover art depiction of Conan The Barbarian tales.

While there's none of Halford's vocal histrionics, the clean delivery, locked-in clickety-clack rhythms and the occasional peppering of fleet fingers recalls the British legends. Look no further than the punishing title track, cut from the same cloth as the Priest's "Firepower" and/or "Leather Rebel". Good stuff, easily the best tune of the bunch! Thumping mid-paced "Immortal" opens the proceedings. "Beyond The North Wind" adds a bit of aggression, sliding into vintage Iced Earth territory. Returning to the ‘80s JP vibe is "Island Of The King", although after its intro, contemporary Teutonic metal is a more apt descriptor. There's a gritty (dirtier guitar tone) "Burn Another Liar" (great title!): a thundering grooving beat spiced with spotlighted guitar. The accelerator is pushed to the floor again, for "Nine Worlds". Proudly flying that Priest flag. Ditto the syncopated double bass drumming (ride cymbal accents) and staccato riffing "Every Man My Enemy". Begun on acoustic guitar, "Alone Against The Savage Hordes" it quickly kicks into a Maiden approved gallop.

Probably took longer than it should have, but glad to finally make their acquaintance. Don't make the same mistake. Investigate now.