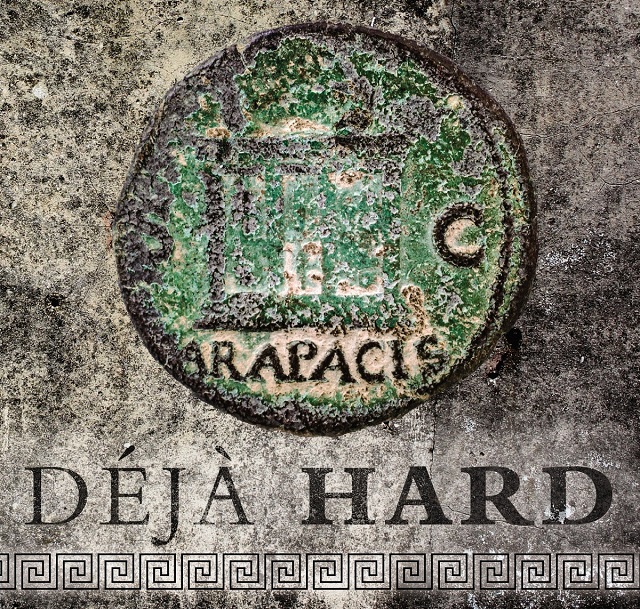 This 2020 release: Déjà Hard – by Canada’s AraPacis, marks the second famous keyboard player from Ritchie Blackmore and Deep Purple circles to work with AraPacic, the first being Don Airey on a previous release. Also, this EP being the second release in a row to feature Stone who was also on 2019’s – Paradox Of Denial EP, and now a current fixture in the band. But I am familiar enough with Stone to even be biased, so this is another batch of AraPacis songs I can say are more than up to catalog scratch and play very well to prog rules.

Jerry Fielden is a master guitarist and core musician and songwriter, it should be anyone’s opinion that’s heard him shred, he’s amazing. And his wife, Michelle Macpherson is also a killer partner in the band on vocals. This EP happens to equally up their game as they brought their hearts and souls to the table, backed by the others with Stone’s immaculate keyboard playing added. These four tracks far surpass the previous release, including Stone’s appearance on that disc, which seems to come full circle and integrated with the band’s sound as the full-fledged member he is happy to be. I am glad Stone has found a home in this band, and his work is laid all over it with great enthusiasm, and if you know this gent’s work you’ll also be glad to hear him working his more relaxed and groovy side to strength, as he is beyond a straight metal musician.  That is also the case for all the players in the band, but it is worth noting how he fits in like a glove no matter how the process of recording played out.

I find it all very intensely soothing and Déjà Hard to be a 2020 metal release to watch for by the masses, also featuring Jean Audet on bass, Gwendolyne Krasnicki on viola and violin. “Tail Spin” opens with a vengeance and you are transported back to all of what used to be great about music and heavy rock on the radio, topped off with light edges of the Alan Parson’s meets space rock flavor. This is everything you’d expect from Stone, especially if you’re really up on this long lost genius but it is a surprise kick in the pants for the band because it flows so naturally well between each song. “Horror Show” brings out the usual side in the band, but it’s in the way they deliver it on this EP that must be pointed out as it stands apart from much of their previous works and this track would normally be harder. It’s like hearing AraPacis on another level without forgetting it’s them. It doesn’t matter if the tempo is up or down, they bring the same goods to the table. I know their music but only the artists really know their entire musical lineage and I have only been a spare time observer and reviewer, but I know a breath of fresh air when I hear one. “Fast Fingers” is the peak track of the EP with a magnificent display of guitar and keyboard work by Fielden and Stone. And they finish it off with “Crisis” coming in a timely matter and leaving on a high note on an EP with undeniably awesome tonal qualities and pure consistency.