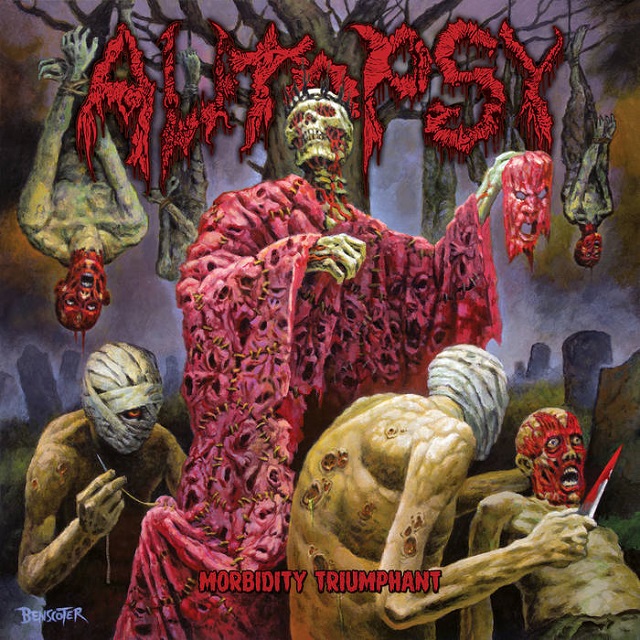 It's been seven years since gory, grindy DM legends Autopsy dropped the excellent Skull Grinder record (at 28 minutes, I call it a full-length, although “mini-album” works and was always kind of a cool designation in my mind), and, really, I've got to say this: Autopsy's 2011-2015 run of four records totally rules, the band on a near-Napalm Death/Kreator mid-career resurgence.

The momentum was lost but Morbidity Triumphant is here to destroy, and destroy it does through all manner fast (“Stab The Brain”) and sludgey (“Final Frost”), the two speeds we want out of this DM institution. New bassist Greg Wilkinson (of the underrated Brainoil) holds his own alongside terrible twosome Danny Coralles and Eric Cutler and, of course, drum/vocal hero Chris Reifert (who plays in Static Abyss with Wilkinson). Autopsy's strength has always been their incredible grasp of eerie atmosphere, of weird riffs, of horribly ugly punked-out death/doom/sludge and look at this, the opening riffs of “The Voracious One” bring the swamps home, doing all that stuff in one atrocious swoop.

Love how things then get lower and slower for “Born In Blood” before the band picks up to an extremely punk place, Autopsy just sticking to their guns—always—and doing what is right, which is sewage-grade death/doom, punked out with just enough gore-grind in there for good measure. “Tapestry Of Scars”, again with those icy, sideways, horror-movie riffs that quite literally only Autopsy ever manage to pull off so well; “Your Eyes Will Turn To Dust” is a killer atmospheric sludge/death party to close things off, somehow all at once being scary and a party, with a great song title to boot.

All told, another excellent addition to a catalogue I can find very little to complain about in, Autopsy emerging as a beacon of integrity and commitment to the dark arts here, once again morbid and once again triumphant.