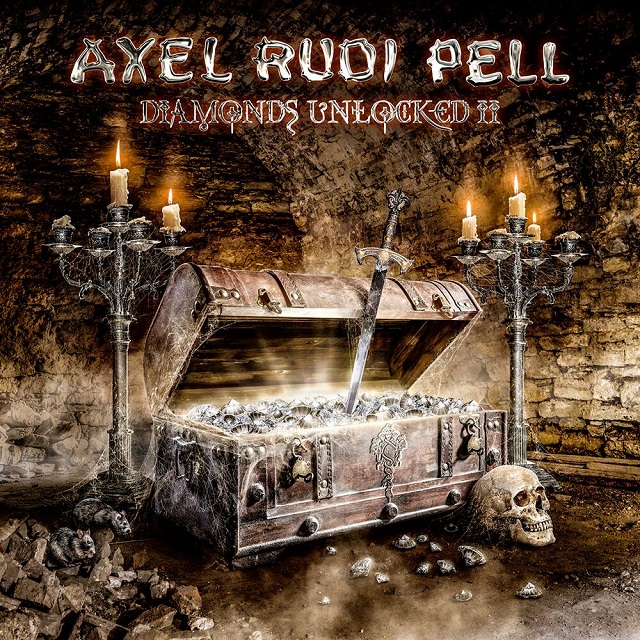 As the title intimates, this is the German guitar wizard's second attempt at a covers album, featuring all new recordings (not some Covid-induced gathering of old tracks) with the current band. OK, the pandemic forced US based drummer Bobby Rondinelli to record his parts in NYC, but the rest happened at Blind Guardian singer's (Hansi Kursch) studio. The choices are decidedly non-metal, in fact, several predate even Pell's lengthy career, but no matter, as they're all given the ARP once over.

After a short, original instrumental intro ("Der Schwarze Abt”) a run-through of Sammy Hagar's "There's Only One Way To Rock" kicks things off. As it turns out, it's the most aggressive number to be found, amongst the ten offerings. Lots of material that showcases Johnny Gioeli's impressive voice (like any longtime ARP, or Hardline, fan doesn't know that already?), slow/emotive guitar and the odd piano too. Probably the most unusual inclusion is the Paul Anka penned "She's A Lady", made famous by Welsh sex symbol/crooner, Tom Jones. It retains the ‘70s staging/pacing, just with Pell trademarks. Kitschy treat (if versed in Jones' rendition).

Elsewhere, there's a mixed bag of ideas that hold significance to the shaggy, blonde haired and mustachioed string bender (not sure everyone else will unanimously agree). "Lady Of The Lake" was done by Rainbow, during the heyday of Ronnie James Dio/Ritchie Blackmore (of whom Pell is an avid devotee). So no crime in preferring the original. From '73, "Black Cat Woman" (Brian Johnson fronted Geordie) is a mid-tempo pounder. Works well as an ARP tune. The piano and acoustic guitar ballad "A Room With A View", has something of a country and western vibe. Apparently it's from a 5-hour TV movie/mini-series that was big in Germany (Wilder Westen Inklusive), reportedly a 1988 rip-off/inspired by Chevy Chase Vacation films. "Sarah" has more oomph than most, sort of a rowdy soundtrack piece. It was the lead cut on Chris Norman's (Seventies singer with Smokie, sang "Stumblin In" duet with Suzi Quatro) Different Shades album (1987).

The final third houses the real head-scratchers, beginning with "Rock n Roll Queen" by the heretofore unknown The Subways. Apparently the song appeared in the fourth Die Hard movie (did anyone actually watch that?) and a German film (Die Welle/The Wave), so perhaps Pell's a film buff. While the titular phrase is nearly the summation of the lyrics, it is a riffing, mid-tempo number. Next is a roller rink keyboard (Thanks, Ferdy!) dominated take on perhaps the most covered song in rock history, the Rolling Stones' "Paint It Black". Sorry, really don't need to hear yet another version of the song, especially one that stretches the running time to over six minutes. Another frequently covered option (CCR, Joe Cocker, Annie Lennox, etc.) "I Put A Spell On You", (minus any rass horns, like the Screamin' Jay Hawkins version) has a meandering, slow picking, bluesy feel. The finale belongs to ABBA. While "Eagle" is not instantly recognizable as such (compared to many of the Swedes' 70s hits), it was included on the 2001 Nuclear Blast tribute to ABBA. Interesting enough, ex-Pell vocalist Rob Rock also did a much more thumping/metallic version, on his Rage Of Creation disc, back in 2000. The song slots nicely into the mid-paced Pell catalog.

I really enjoy Axel's original material, which seems to come out on an annual basis, but these are neither the definitive renditions, nor special enough to warrant repeated listens (especially when weighed against his vast, prior output).