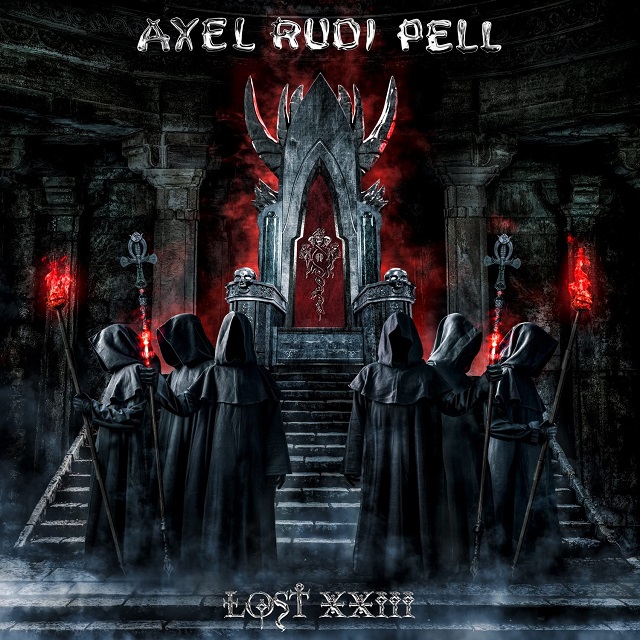 Different sort of intro, on the German guitar guru's 21st solo effort. That oft heard, distantly echoing voiceover, is broken by the crunch of a few warm-up notes, giving way to some tinkling of ivories, from mainstay Ferdy Doernberg. Pell's guitar rejoins the fray, as well as a military snare cadence from ex-Rainbow drummer Bobby Rondinelli. All segues into first single/lead track "Survive", a feisty, upbeat anthem fittingly themed for the intervening years since the somewhat prophetic entitled 2020 release, Sign Of The Times.

"No Compromise" is built around a recurrent chorus of "shout it out loud," the kind of mid-tempo number Pell has been doing throughout his 33 year post-Steeler career (German outfit, not the LA one). Bouncy "Down On The Streets (second single/video) is the first of two songs that deal with homelessness. There's a little room for six-string embellishment on this one. Conversely, the jangly foundation of initial ballad, "Gone With The Wind" is a simple little (almost acoustic guitar) pattern, gently strummed. About half-way through, Axel plugs in and lets a power chord rip, augmented by a brief spat of fleet fingered bravado, before everything returns to the slower, more belabored pace. It's the true tale of a dog who waited on a train platform, for a year, but ultimately in vain, for his deceased master.

"Freight Train" kicks off, as if torn from ‘80s era MTV: big riffs and equally huge drum sound. It relates to the nomadic lifestyle of American hobos, drifting across the country, jumping on & off trains. Easily the most aggressive ARP tune in a long while, the speedy "Follow The Beast" headbanger contains some veiled NWOBHM references. Piano ballad "Fly With Me" gives Johnny Gioeli's voice the opportunity to shine, unencumbered. Although an American (cut his teeth in ‘80s Sunset Strip act Brunette, then international success, alongside Journey guitarist Neal Schon, with Hardline), Gioeli remains virtually unknown in his homeland and criminally overlooked in discussions about great vocalists.

"The Rise Of Ankhoor" is a lively instrumental that repeatedly changes pace throughout. The mad axeman claims "The title is a play on words based on the terms ‘anchor’ and ‘encore'." The disc concludes with an 8:35 title cut (XXIII is Roman numerals for "23." In the alphabet, the 23rd letter is W, so the title means Lost World). The tune utilizes Arabic scales for a unique feel.

Speaking of lengthy cuts, the digi-pak includes an eleventh cut, a 7+ minute bonus. While Pell issued "Quarantined 1" in the Spring of 2020, via YouTube, there are now drums added to the all-instrumental cut, making it (in the guitarist's eyes) a legitimate ARP track. Love the guy's playing, but this package seems a bit too formulaic, lacking a cohesive tone/sound: a couple of rockers, a pair of ballads, two instrumentals (three, if short "Prequel"/intro is included) and several mid-tempo inclusions. He's done covers albums and assorted ballad compilations, so as a diversion, how about a (predominately) straight ahead, full-on rock record?