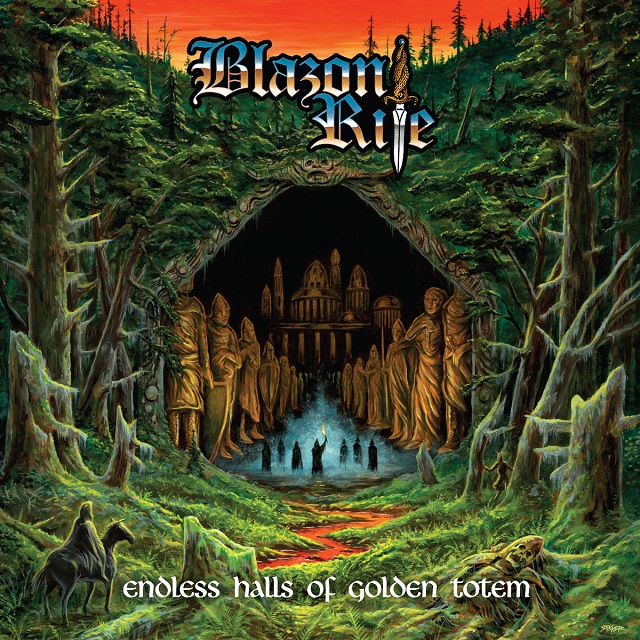 Full-length debut from Philly traditional metallurgists. Quality construct, but difficult to categorize the sound(s). Undoubtedly there's something of a power metal vibe, but to label Blazon Rite as such is limiting, as there are plenty of slower (belabored?) passages that lay at the feet of uniquely European masters like Atlantean Kodex (perhaps it's the self-assured, bellowing vocals). Equal parts NWOTHM too. Regardless of convenient tag, the eight lengthy compositions are worth a listen and hopefully will find a home in your collection.

Interesting perspective, "The Executioner's Woe", looks at the persecution and psychological issues plaguing one who makes a living by chopping the heads off the convicted (complete with thump sound effect & cheering crowd!). Mid-section of the title track takes a short detour (almost like two songs melded into one), diverting into ‘70s prog rock (think Jethro Tull) territory, before returning to a punishing bass driven rumble. "Alchemist's Brute" veers near thrash territory, but never devoid of melody. Within, there's also an eerily unsettling keyboard passage. A doomy "The Night Watchmen Of Starfall Tower" breaks up the lumbering pace with clean/spirited guitar break. Odd little keyboard embellishment in "Consumed By Glory Light". The Rites apparently enjoy throwing the listener a curveball every once in a while, injecting the unexpected (keeping it interesting, as well as the listener on their toes?). The sound of lapping waves greet the pedestrian-begun, majestic/funeral "Into Shore Of Blood", which ultimately speeds off in the antithesis direction/pace.

The soundtrack to an old (non-computerized) role-playing game, ala Dungeons & Dragons, albeit without the sorcery and mythical beasts.