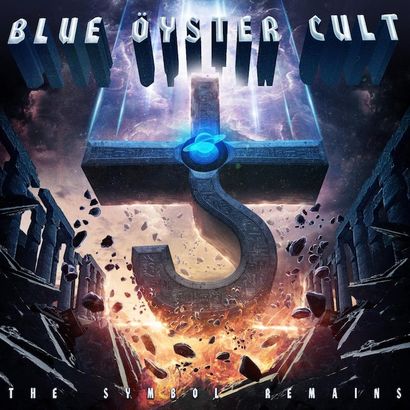 A common mistake when expecting a new album from a legendary band is to get over excited; particularly when that band has taken 19 years to produce it.

And in these times of tyranny and irritation we need Blue Öyster Cult more than ever. After all how bands are still kicking it and living off their name of yesteryear? How many bands make truly awful music disguised with great artwork and some clever promotional spin?

Clearly, Blue Öyster Cult is not a band who feels it necessary to release new music until they are ready. This is a suggestion that perhaps, this album just might be something worth exploring, especially with the more recent output being mostly well received by fans.

Back in the earliest years of their existence, the Cult were named Soft White Underbelly. Though there is not a member remaining from that initial line-up it’s an ironically appropriate description of the prevailing style on offer throughout The Symbol Remains. It should be noted that Albert Bouchard does make an appearance on the opening track, as a backing vocalist and cowbell master, which is a nice touch.  “That Was Me,” hints at a heavy barrage to come with a thumping riff and a snarling vocal but it’s the heaviest track here.

From “Box In My Head” onwards it is a more sedate affair, focusing on harmonies and truly luscious guitar playing. No complaints with the songwriting or the sound of the collective. It’s often vocally a little too light, producing a fairly dated '80s soft rock sound at times. But the songs are good enough to override the glitch which is more one of production most likely caused by the band producing the album via online communication.

The guitar sound is smooth and worthy of the Buck Dharma legend. The extended solo on “Nightmare Epiphany” along with the tremendous break on ‘The Alchemist’ are highlights. The latter especially is as dark and epic as the title demands.

Be warned that the majority of the harmonies are a little on the pop side, but then there has always been that side to the band - their greatest songs all feature strong hooks.
Perhaps “Tainted Blood” is a touch too predictable in its stadium rock approach but then the boy band chorus of “Edge Of The World” takes things even further.  It’s different and yet strangely memorable.

Something is at work – probably some kind of satanic symbol or secret treaty us mere mortals are not quite au fait with. That’s fine. The album is too long at over an hour with 14 tracks (15 if you get the version with an acoustic remix of “That Was Me”) and midway through it begins to lose a thread or two.

“Train True (Lennie’s Song)” sounds like Billy Ray Cyrus, but then it was written with Dharma’s son so perhaps he’s a fan. Things begin to pick up again with “Stand and Fight”; a song so lumpen in its early 80s metal thwack that it’s almost horrible. Elements of Thor or Diet Manowar edge you closer to the skip button until it starts to actually wind its way down your furry loin cloth and through to the cod piece. With its (probably accidental) Jason Newsted bass hum and fist slapping chorus it’s an old school pleasure.

The album ends with “Fight” that hints via the last line that this might be the end. ‘Last one, turn out the light’ waves Dharma. No one sounds like Blue Öyster Cult. Not even they sound like them. Despite its imperfections and occasionally irritating vocal production, this stands well in the pantheon of Cult classics. And if it is their last they go out with a large enough Cultösaurus Erectus to be proud.