BROTHERS IN ARMS - Sunset And Clark 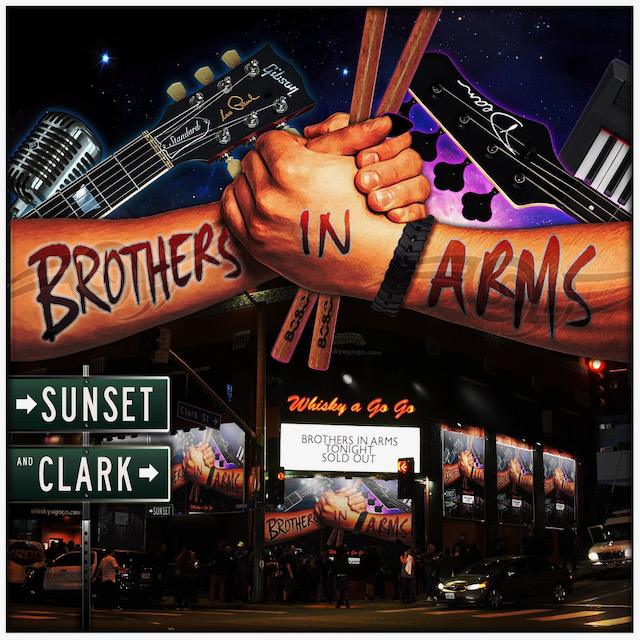 The idea of Jack Frost (Seven Witches, Bronx Casket Company, Aldo Nova) was to gather some of his favorite musicians in hard rock and heavy metal to record songs in the spirit of, well, the Sunset Strip in California. So no, these songs sound nothing like Witches or Casket. It's the aesthetic from the LA bands but not Ratt, Dokken, Poison worship. Roth-era Van Halen though is the spirit in the riff to first track “Bitch Is Crazy” which is perfect for Keith St. John (Burning Rain, Montrose). Frost wrote all the music; the singers wrote the lyrics for what they sang on, with Karl Wilcox (Diamond Head) and Alex Jansen (bass for Hardline, Scorpions) in the rhythm section.

The simplicity and directness of “Last To Know” with Andrew Freeman (Last In Line) makes it instantly catchy and singable. Switching coasts, that riff to “The City Never Sleeps”, featuring Steve Overland (FM, Overland), somebody was listening to “Hardest Part is the Night” from Bon Jovi's hard rocking "7800 Degrees Fahrenheit". Frost here brings a little more spice to the solo without losing the tune's melody.

There is also hard rock from around the rest of the country from ‘80s/early ‘90s, some of the bluesy Tesla and Cinderella in “Feel The Love”. Charlie Calv (Angel, Bronx Casket Co.) as always adds a great touch with those keyboards in “Make You Mine” and “Long Way From Love” with Nick Walsh from Slik Toxik on the vocal. Freemans back on “The Ties That Bind”, and “My Heart Knows” I'm pretty sure that's Paul Shortino (Rough Cutt, King Kobra). Both strong rockers. “Wasting Light” is a fitting finger picked riff for Todd Poole from Roxy Blue, its got that first Roxy album feel.