BURNING WITCHES - The Witch Of The North 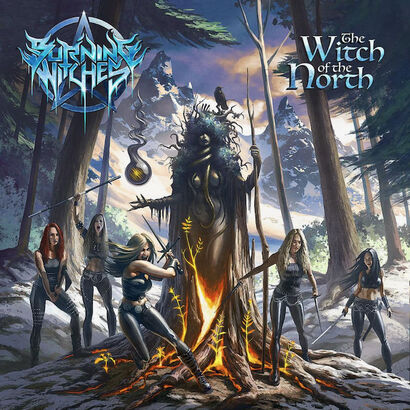 The Swiss Misses' fourth full-length overall, but first since the departure of guitarist Sonia Nusselder (who left to start Cobra Spell), replaced by first grade gal-pal and former Gonoreas stringbender Larissa Ernst. In the interim, management was overseen by Destruction mainman, Schmier, a scene veteran who should be able to avoid many of the pitfalls that plague newer bands.

That said, it's interesting how much "rock" is between the gritty metallic grooves within this baker's dozen (there's also a bonus of Savatage's "Hall Of The Mountain King", solo courtesy of Chris Caffery ). Laura Guldemond (who's actually Dutch) has the ability to deliver a caustic, fiery performance, but she can also coo convincingly and these tracks showcase ALL her abilities, not just heavy metal screams. "Lady Of The Woods" even sports a bit of backing male opera!

"Winter's Wrath" begins the album with an acoustic guitar, multi-sex chant and tribal drum, basically an intro to the title cut's slow gallop, complete with Guldemond's sinister sounding vocal cords. No titles like "We Eat Your Children" this time around, but "Tainted Ritual" is a balls out speedster, start to finish. A call for unity, "We Stand As One" is a mid-paced metal number, while mellow begun "Flight Of The Valkyries" eventually kicks into a blazing guitar romp (punctuated by double bass driven drumming) and a vicious vocal from Laura.

More group unity, in the form of "The Circle Of Five", the mid-tempo, pre-release single, with gang vocals, come the titular chorus. The aforementioned cooing can be heard on the Doro-ballad-ish "Lady Of The Woods", which not only demonstrates Laura's high end, but strength, especially when the track lays her voice bare. She's more of a Halford meets Angela Gassow (Ex-Arch Enemy) on "Thrall", whose pacing vacillates. "Omen" is 48 seconds of muted voiceover, preceding the aggressive, fist-pumping "Nine Worlds".

Plenty of ride cymbal on the middle of the road (apart from the guitar break) "For Eternity", whereas the "Dragon's Dream" follow-up is a shred-fest, backed by thunderous drumming/, wrapped in a catchy chorus. The speeding guitars almost sound like video game effects. Proper disc closes with "Eternal Frost", wind swept chimes, an atmospheric soundscape (much like the beginning of the disc). The Tage classic is available on some formats, so chose wisely.

Probably would benefit from pruning one or two blossoms, to facilitate greater growth, but it's still a prize winning creation. Now let's defeat this virus so they can cultivate North America soil (as they've wanted to, for the last two years).