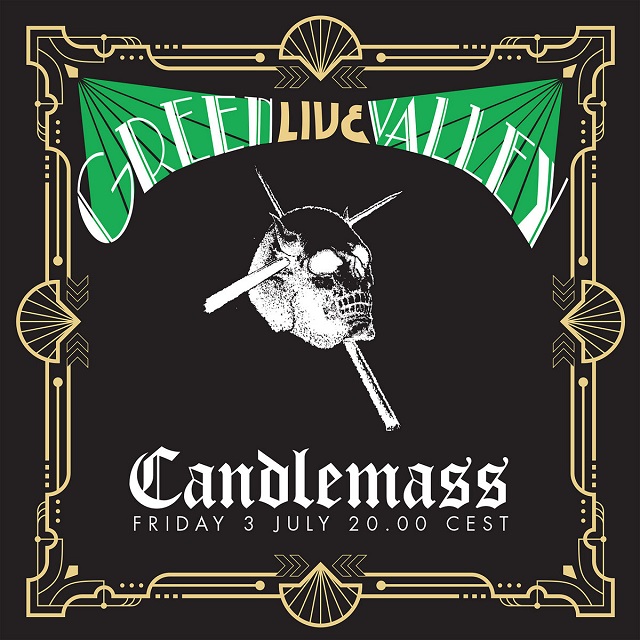 My, how time flies. Recorded last July 3, amidst the start of this pandemic, the venerable Swedish doomsters offered a livestream/concert that has now, in the SECOND year of Covid 19 lockdowns, appeared as a physical product (including DVD w/ extra footage). Although their 35 year recording history is peppered with assorted live products/videos (many just limited editions of decades old shows), this is the first, complete concert with returning/original singer Johan Längqvist, who only lent his voice to the glorious Epicus Doomicus Metallicus debut, then all-but-disappeared until 2018.

While each/all of the C-mass live output centers around a core cadre of cuts, it was Längqvist who birthed the initial renditions of "Under The Oak", "A Sorcerer's Pledge", "Solitude" and soundcheck recorded "Demon's Gate" finale (all Epicus tunes): sequence completing the evening's performance. The remainder of the dozen tracks are culled from the classic, ‘80s era material, the lone exception being newbie "Astorolus". However, the disc/show begins with "Well Of Souls", bludgeoning its way into your subconscious, like a pesky insect larva, slowly, but relentlessly boring through a seemingly impenetrable membrane. Its lone moment of animation is a wickedly winding solo, courtesy of southpaw string-bender Lars Johansson.

Then on a dime, it segues into a galloping "Dark Reflections". Biggest misconception about the band (and many so-called "doom" acts, in general) is that the music is one dimensional and depressive, but when done well, the dynamic changes become gargantuan and help magnify the depth of the lows. The moody Swedes remain upbeat (at least musically) on the "Mirror, Mirror" follow-up. Sadly, (at least on the CD) the running order is edited, such that there's nothing but (somehow fittingly) silence between each song: no comments, stage banter or even instrument tuning. Clinical and sterile.

The aforementioned, lone inclusion from the new millennium is simply pulverizing. If you haven't picked up The Door To Doom (why not?), do yourself and the inactive-imposed musicos a favor. Slow, heavy and with another of Johansson's left landed paths flying atop the reverberating bottom end. Of all the vintage numbers aired, "Bewitched" bears the most striking difference to the operatic/baritone Messiah Marcolin version. Längqvist preference? Something of a psychologically demented off-kilter style, inducing uneasiness in the listener, like a Hannibal Lecter lullaby.

"Dark Are The Veils Of Death" rides a tennis volley timed rhythm: some moments playfully lobbing the ball back n forth across the net, from the baseline. Then there's the rapid fire racket to racket, face-to-face exchange, net-side. The spoken intro to "Under The Oak" is almost a whisper, then the words come more forcefully, building to the "whoa whoa" accompaniment. A 2:53 instrumental jam makes use of Hammond organ, for a dreary, ‘70s funeral vibe, before moving on to nearly a cappella begun "A Sorcerer's Pledge". The veiled agony is lifted with a couple of bass flourishes, from mainman Leif Edling, before the full group joins in. "Solitude" also starts with Längqvist alone, at the mic, greeted by a wall of feedback and menacing reverb, each drum beat another hammer strike on the Crucifixion's impaling nail.