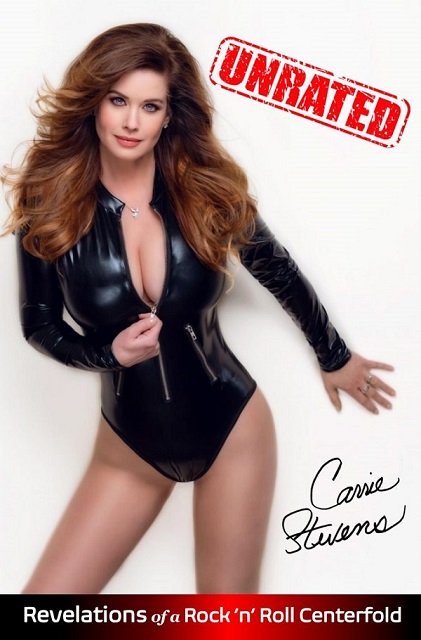 “My chapters all begin with the word ‘Don’t’ (Don’t Have A One-Night Stand, Don’t Blow Off Billionaires, etc.) because I did the opposite of everything nice girls are taught to do,” says Playboy Playmate, model, actress, and former girlfriend of late KISS drummer Eric Carr in her lascivious memoir, Revelations of a Rock ‘n’ Roll Centerfold. In fact, the idea for this book came from KISS bassist Gene Simmons, who once slipped Carrie his hotel room number.

Born in Buffalo, NY and raised in Hardwick, MA, Carrie lusted after David Lee Roth as a teenager and unfortunately, believed her worth was based on her sexual attractiveness. In 1987, Stevens met Eric Carr in a hotel lobby; there was “instant chemistry.” When she was 18, and he was 37, they first hooked up. Months later and they were a couple with Carrie unabashedly proclaiming, “To say it was wild, crazy sex would be putting it lightly.” After four years together, Eric is diagnosed with a rare cancer of the heart, which actually brought the two closer, until he sadly passed away in 1991.

At age 22, Stevens had lost the love of her life. Yet she starts mingling with her initial crush, David Lee Roth. Unbelievable but true, the blue-eyed beauty is flown to the Island of Borneo where she joins the harem of Prince Jefri! During this six-month experience, Carrie was showered with cash and luxurious gifts, but “being in captivity gets boring.” Upon returning to the States, the brunette bombshell auditions for Playboy, and becomes Playmate of the Month for June 1997, which she admits “made me a celebrity.” Romantic relationships with actors, musicians, and athletes, including Michael Keaton, Enrique Iglesias, Bret Michaels, John Elway, Howard Stern, and John Stamos flourish and flounder. During the filming of the 2001 movie Rock Star, with Mark Whalberg and Jennifer Aniston, in which Carrie had a minor role, the film’s director gets her pregnant – and that places Stevens on another unexpected, and highly tumultuous path! This easy to read, and hard to put down, autobiography is full of shock, surprise, and drama. Don’t miss out!