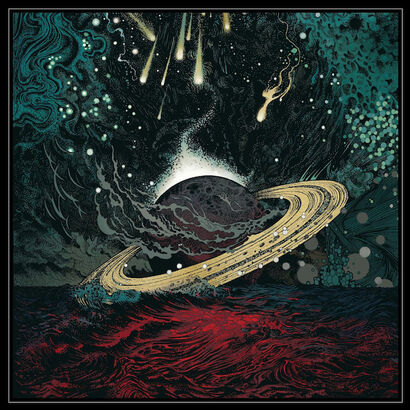 Cave In are one of the great heavy bands of our time, forward-thinking, genre-ignoring shapeshifters of the highest order, and here on their first full album without bassist Caleb Scofield, who died in 2018 and appeared on a bit of the band's 2019 album Final Transmission, you'd be forgiven for feeling a bit... weird about it all. It's hard to imagine a Cave In without Scofield, but Converge bassist/Cave In superfan Nate Newton is about a good a replacement as could possibly be imagined.

Opener “New Reality” showcases the band's four-on-the-floor space thrash, those excellent soaring vocals mixed with screaming, catchy riffs, a hardcore stomp all wrapped up in a concise rock framework. See? There's no one like Cave In, and while I've had a bit of a strange on-and-off relationship with much of their post-Jupiter output (that album and Until Your Heart Stops are drop-dead masterpieces), it's always with much respect that I let their music wash over me. Heavy Pendulum features a lot of music to do just that: at 14 songs, many of which are quite long, this double album is a whopper. “Blood Spiller” looks to Jupiter and beyond with much success; “Floating Skulls” rides swirling riffs into the basement shows in outer space; the title track brings to mind the good parts of Alice In Chains. We get the weirdo interludes (“Pendulambient”, actually super heavy), and “Careless Offering” is prime Cave In. As we move into this massive album's midpoint, we get the long slowburn of “Blinded By A Blaze”, a wonderfully crafted sludge space rocker that is a great representation of what this band does. Yes, the band should have saved a few songs for a great EP and made this record a bit more digestible, but every song here is excellent (“Nightmare Eyes” is a late-album stunner), this record signalling a new life for Cave In that absolutely no one saw coming.

Cave In are up there with bands like Neurosis (purity of vision) and The Dillinger Escape Plan (relentless discovery), and Heavy Pendulum proves that, a wildly enjoyable victory lap that I just had no idea was going to even exist.