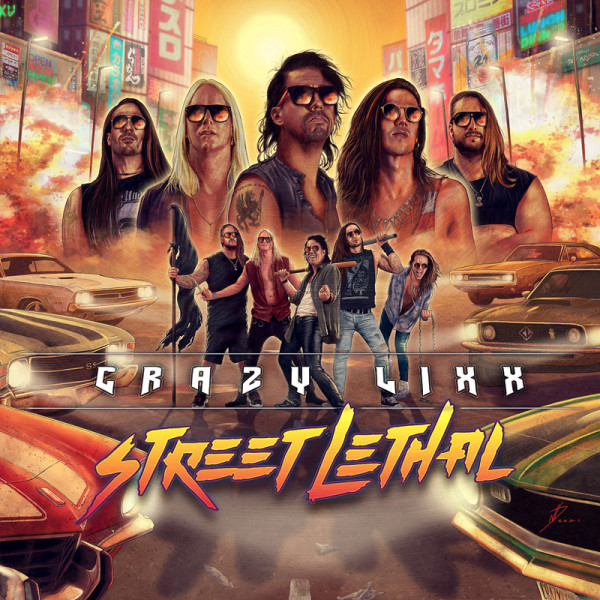 Seventh album from Sweden’s Crazy Lixx who at their inception, and the debut in 2007, have been keeping the ‘80s hard rock and glam metal alive. I’ve been a fan of their spirit and mission for many years, using all the genre’s great ingredients. If you never heard them, check out singles like “Wild Child”, “Breakout”, and “Hell Raising Women”.

Def Leppard, Dokken, Ratt, Firehouse, Warrant fans and other bands of their ilk; you should be supporting Crazy Lixx too. The new generation are as important as the originators of this music. Now while I like Crazy Lixx, they worry me sometimes too, teetering on cheesy and corny depending on the song, and or video like the single “Anthem For America”. Or “Silent Thunder” from the previous album Forever Wild was maybe a little too King Kobra Thrill Of A Lifetime light?

Street Lethal’s intro “Enter The Dojo” is just unnecessary to set the tone, too much keyboards, luckily “Rise Above” kicks in with a great crunchy riff and balls. Big vocal harmonies for “The Power” but not much to the arrangement or hook, but an upbeat recovery for “Reach Out” follows. Boy, do I hear Rick Springfield’s Affair Of The Heart (but that’s a good thing) in those keys for intro “Final Fury”, pre George Lynch-ish guitar driven title track. “Caught Between The Rock n Roll”, really, have those words “rock ‘n’ roll” been used so much all that’s left is “caught between”? Should have gone with another title. Song’s not bad though, got a Tesla feel. Ballad “In The Middle Of Nothing” is fine.

Album closes strong with melodic guitar melody in “One Fire-One Goal”, and “Thief In The Night”, for more an AOR rocker. Would be a great single. No one is reinventing the wheel here, just retaining the past in the present.