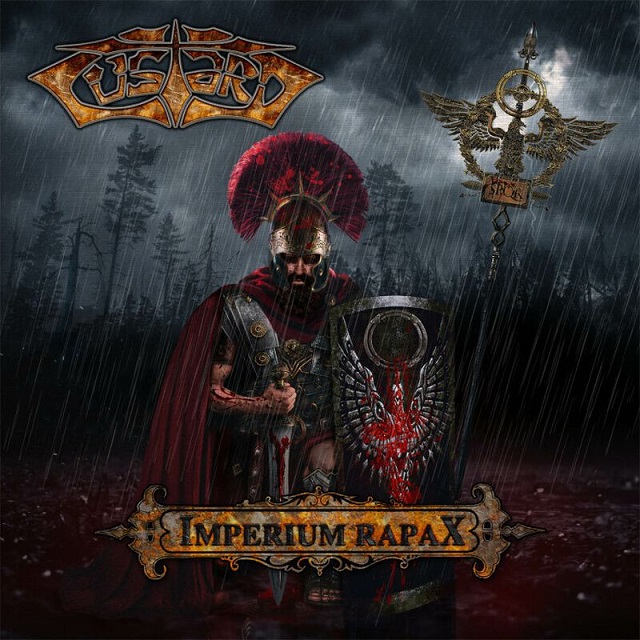 Usually enjoy these guys, as they typically offer a slightly different take on Teutonic metal, while never straying too far from the tried and true format. Here, the German metal outfit forges into concept albums, with the history of the Roman Empire: from Romulus & Remus, through legions and centurions and war with Hannibal to Spartacus, Mark Anthony and Caesar.

The 1:48 titular instrumental kicks off the album, in all its brass fanfare and drum glory: setting the regal/historic tone. Speedy "Children Of The Wolf" gallops along, relating the tale of the city's founding twins. There's a snippet of gruff enunciation (barking?), counterpoint to the otherwise lofty vocals, come each chorus. While there are 14 tracks, all told, several are nothing more than 60 seconds (or less) intermezzo between the proper songs. Dirty, buzzsaw guitar intonations characterize the mid-tempo Manowar-ish "Res Publica". Complete with narrative voiceover, midway through, the pace takes off, from there. Factual recounting of Hannibal's struggles with the Romans can be found within "Blessed By Baal" while the meat & potatoes metal of "Blood And Sand" is about Spartacus. "The First Empire" mentions the famed quotation "veni, vidi vici" and the Ides of March in Julius Caesar's ascension/assassination as Emperor of Rome.

Following another intermission, Crystal Viper head honcho Marta Gabriel (who moonlights on bass, in Blazon Stone) offers a duet on "The Goddess Of Magic And Death", a dirty guitar riff accompanying. The album closes with an uninterrupted four song arc. While "Furor Teutonicus" opens the musical floodgates, it too keeps things retrained, (unfortunately) pulling back on the reins when the "furor" threatens to fly off, unhampered. However, it remains the most metallic inclusion of the bunch, with repeated runs up/down the fretboard. Riffing headbangers like "Ode to The Flames" and Morituri Te Salutant" follow-up are more goodies, but with this winning hand buried so deeply in the deck, it's unlikely to get played. The "Quo Vadis" finale begins with acoustic guitar and gradually builds to crescendo.

Wish there was more urgency in the static Lordian Guard sameness (especially during the initial half). If ever there was a time for "rock ‘n’ roll," it was during the Roman Empire, so why not capture/regurgitate some of that fire?