DAVE MUSTAINE – Rust In Peace: The Inside Story Of The MEGADETH Masterpiece 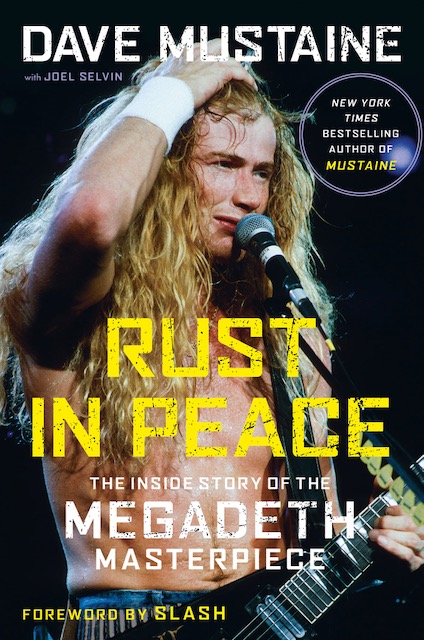 The story begins August 20, 1988 at the Monsters Of Rock Festival at Castle Donington in England where Megadeth performed in front of a record crowd of 108,000 people, with frontman Dave Mustaine admitting, “Everybody was strung out and, of course, you can never take enough heroin.”

What a way to start the 191 pages that comprise The Inside Story Of The Megadeth Masterpiece. Co-authored by Joel Selvin (Sammy Hagar’s Red), with a foreword by Guns N’ Roses guitarist Slash, main author Dave Mustaine included significant contributions from Megadeth bandmembers David Ellefson and Marty Friedman, producer Mike Clink, as well as agents, managers, and his wife Pam. Utilizing this format allows for point – counter point, thereby giving the reader varying recollections of the same scenario.

Heavy drug use dominates the first few chapters with Mustaine confessing, “Getting high was everything to me.” Bassist David Ellefson chimes in, “Dave and I started to do a lot of crack.” Throughout failed attempts at rehab, Mustaine reveals interesting tidbits of info such as, “I wrote the lyrics to ‘Lucretia’ in the back seat (of Ellefson’s van), feeling so fucking helpless.” Furthermore, the Rust In Peace album title came from a bumper sticker. After an arduous search for a guitar player, Marty Friedman, who “was borderline homeless at the time… living on rice and lollipops,” joins Megadeth. And Mustaine’s reaction is completely unexpected – “I was so intimidated by Marty’s playing that I went out and bought heroin.”

Having finally managed to get clean and sober, Megadeth record the greatest album of their career, Rust In Peace. Remarkably, Mustaine did the solo for “Holy Wars” in one take. Chapter 11, The Songs, provides incredible insight, including comedian George Carlin’s influence on “Hangar 18”, and Mustaine’s true feelings about “Dawn Patrol” – “Ellefson’s bass riff didn’t impress me at all at first. I kind of thought it was lame to tell the truth.” Touring in support of Rust In Peace commences, and the tales from the road are nowhere near as salacious as hoped for. Instead, the focus during the Clash Of The Titans tours and Judas Priest run, as well as Rock In Rio II, was laser-precision delivery of the music on stage, as well as writing the next album, Countdown To Extinction.

The failed attempt at a Rust In Peace lineup reunion, complete with bickering about finances, is detailed. In closing, Mustaine states, “Nobody left Megadeth and went onto glory like I did after leaving Metallica… I’m an American success story. I want people to know the blood, sweat, tears, and struggle behind the music.” Mission accomplished.