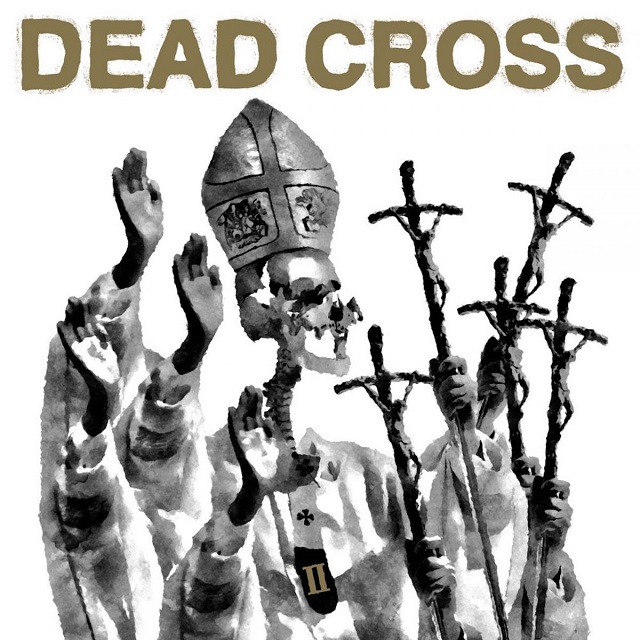 Man, I love Dead Cross, even if I constantly get them mixed up in my head with Deaf Club, one of Justin Pearson's other projects; but while that one deals in grinding power violence and noisy hardcore, Dead Cross—also featuring Mike Patton on vocals, Dave Lombardo on drums, and Michael Crain on guitars—get a bit weirder, a bit more atmospheric and more diverse.

Dead Cross II follows up their self-titled 2017 debut, and it was worth the wait. Opener “Love Without Love”, for example, is a slow-burner of a weird-FNM trip that devolves into frantic, weirdo grinding, and it leads into the excellently moody “Animal Espionage”, featuring some classic Patton vocal lines; the band probably doesn't want to hear this, but this is the best Faith No More song in decades. “Heart Reformer” then lays it all down for a shocking four-on-the-floor old-school punk attack; “Strong And Wrong” finds Patton and Lombardo on the floor of a rec-centre gym for an all-ages grinding hardcore set and 15-year-old me is as stoked on this as 45-year-old me is. Crain's playing throughout is stellar, the oddball guitar work leading Lombardo's obviously always amazing drumming and Pearson's rock-solid bass lines, which carry with them post-punk (hello again, “Animal Espionage”) and off-kilter hardcore atmospheres (let's not forget Pearson, who hops on the mic for an impassioned lead vocal run here in “Christian Missile Crisis”, is in The Locust).

Really, Crain steals the show here, which is a big deal for an album that features Patton, Lombardo, and Pearson (I can't believe how much I focus on Crain, and not Patton, here; rare for a Patton record). Love the Canadian-punk SNFU reference in the lyrics to “Ants And Dragons”, love the very idea of these guys playing in a band together, love Ross Robinson's massive and clear production, love everything about this record.