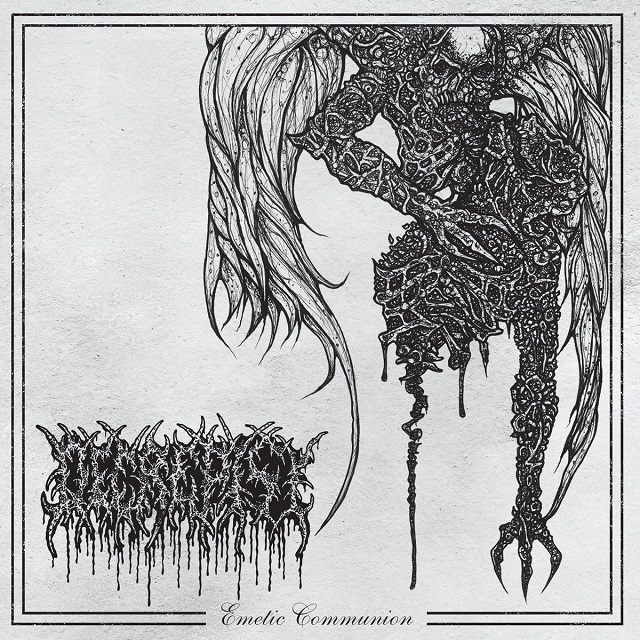 When I saw that Decrepisy was from Portland, featured Kyle House from Vastum and Acephalix, and here on their debut were laying down death/doom songs that are 7 and 8 minutes long, one even hitting 10:35, I knew I had to see what was going on. And the five songs on Emetic Communion do not let me down, the band churning and burning through the ugly side of death/doom, which is good: this music should be ugly.

And Decrepisy is horrid, opener “Dissipating Form”, all 7:54 of it, dragging us through divebombing solos, Incantation-style sludging death, and gore-grind's punk polka, never once sacrificing the pure, raw emotion that seems to fuel every second of this album. I mean, seriously: this is how you open an album in 2021 if you want to drop an extreme metal disc that is totally brutal but also connects with the listener on a deeper level. Bloody fantastic, as is the title track's Slayer riffs and when the band just get slower and lower a few minutes in, guitar squeals bringing the pain in the best of ways; the song's massive kinda-climax around the six-minute mark rules, too.

“Embodied Decomposition” is almost perky near the end; the riff at around four minutes into “Abbatoir Of Sorrow” disorients and pleases before the double-kick barrage envelopes you in murk. Two-minute closer “Anxiety Womb” is just a “spooky” outro, and the album would have been better without it there, so we're left with four incredible death/doom crushers. The only trouble is, where does the band possibly go from here?